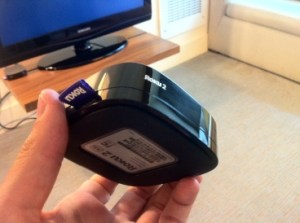 Roku, a device that streams web content to televisions, has collected $8 million in funding, according to a form D filed with the SEC today. Roku confirmed the round and its lead investors Globespan Capital Partners and Menlo Ventures.

Also listed on the form was Robert Kyncl, vice president of TV and film entertainment at Google.

The company, which spun off from Netflix three years ago, released the second version of its streaming device in July. The Roku 2 XS player has taken the company out of its streaming-video comfort zone by adding games and motion controllers. VentureBeat lead writer, Matt Lynley demo-ed the Roku 2 XS in the video below. Angry Birds launched as Roku’s flagship game title.

The $100 Roku 2 XS is the priciest in the Roku line, but is competitive with Apple TV, which retails for the same amount. Though the company is branching out into new forms of entertainment, such as gaming, at the device’s core is Netflix’s app. Hulu, another video streaming company, also has an app on the Roku.

Roku introduced BrightSign in 2006, founded by Anthony Wood, who currently acts as the company’s chairman of the board. BrightSign creates solid state digital sign and kiosk controller products. That is to say, the product controls digital or interactive signs, such as retail display screens.