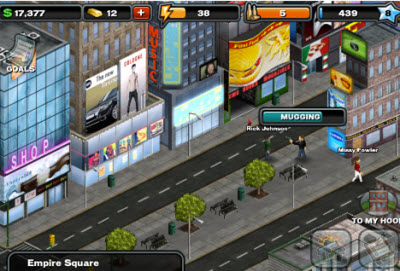 When a game shoots to the top of the Top Grossing list in Apple’s App Store, that’s probably a sign that it’s a good game. But it also shows that the company did something right in getting the game discovered.

That’s the case with Funzio’s Crime City, which has been downloaded more than 1 million times in the past five days onto iOS (iPhone, iPad and iPod touch) devices. The game is currently in the top ten grossing apps list, one of the most coveted spots on the App Store.

The game’s popularity may be due to the fact that it has great 3D-like animation that look nice on the iPhone or that it’s fun to play. But Funzio chief operating officer Anil Dharni said in an interview that a combination of factors lifted this game into visibility above tens of thousands of competing games.

Crime City already had some name recognition when it launched in the App Store last week — the same title has more than 5.5 million monthly active users on Facebook. And it got off to a great start when it was chosen by Apple as a featured cool new app. San Francisco-based Funzio also advertised the game on ad networks, and the game received some great reviews. The company also arranged direct promotional deals with other mobile indie game developers. But it did not use “incentivized installs,” as Apple has banned the practice created by companies such as Tapjoy.

“All of those efforts are enough to get into maybe the top 100, but in the end, users have to like the game because it’s good,” Dharni said.

The game is probably benefiting from the absence of another Grand Theft Auto-style game in the App Store. Take-Two Interactive and Rock Star Games haven’t focused much on making Grand Theft Auto games for the iPhone. They launched Grand Theft Auto Chinatown Wars in 2009 but that title is quite old now.

Crime City offers a more modern take on the crime game genre. In Crime City, the goal is to become the toughest mob boss and rule the city. You can collect hundreds of virtual items and fight others. The game is available for free, but you can buy virtual goods with real money.

Funzio raised $20 million in a first round of funding in May. Investors include IDG Ventures and IDG Capital Partners. It has more than 50 employees and plans to grow to more than 100 this year.

Funzio is releasing games on iOS, Facebook and Google+. At some point, the company will likely address the Android market as well.