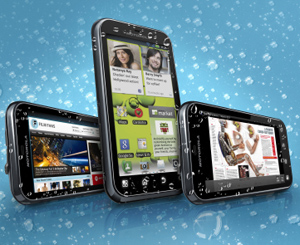 The new Defy+ is the aptly named sequel to the Motorola Defy, which also set itself apart by appealing to people who need rugged devices. The Defy+ has a water-resistant, scratch-resistant and dust-proof design to that’s designed protect your phone when you accidentally drop it on the ground, in your drink, or in the pool.

“Our latest life-proof smartphone delivers the endurance and design strength to keep up with even the most demanding lifestyles, along with the social and entertainment capabilities that put friends and fun in easy reach,” said Alain Mutricy, senior vice president at Motorola Mobility, in a statement.

The Defy+ has some nice tech specs inside the rugged exterior. It runs the Android 2.3 Gingerbread operating system with MotoBlur on top, and features a 1 GHz processor, a 3.7-inch display covered with Gorilla Glass, and a 5-megapixel camera with LED flash and autofocus. Motorola claims the battery lasts for seven hours of a talk time and 16 days on standby.

The phone is first planned to launch in early fall across markets in Asia, Europe, and Latin America, but we expect it will hit the U.S. soon considering the first Defy also came to the U.S. One report suggests it will most likely head over to AT&T.