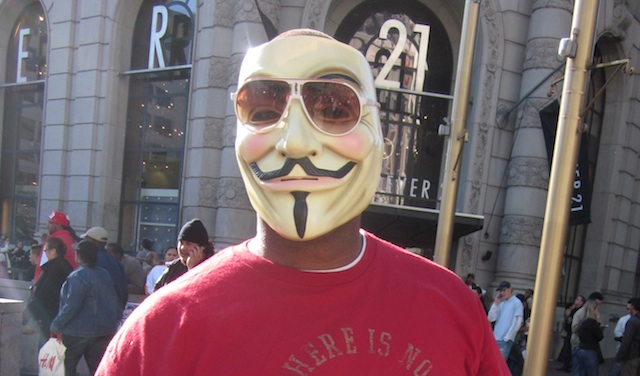 (Editor’s note: Vanessa Camones is the Founder and CEO of theMIX agency. She submitted this column to VentureBeat.)

Depending on whom you believe, members of the troublemaking online group Anonymous, which in March released internal emails purported to be pulled from Bank of America’s private network, may be planning to “destroy Facebook” on November 5th, according to a video posted to YouTube. (Or maybe not, since not all of Anonymous agrees with that plan.)

It’s a dumb, childish idea, but whoever made the video has a point that’s worth thinking about.

The video claims that Facebook has sold users’ information to government agencies, and allows spy organizations to snoop on people around the world. There’s no proof of this, although Facebook (like other companies) is obliged to cooperate with law enforcement to the extent required by local laws. But it’s certainly true that on a less Orwellian level, Facebook has been weak and dishonest on privacy from the start.

This much of the video is true: “Everything you do on Facebook stays on Facebook regardless of your privacy settings … even if you delete your account, all your personal info stays on Facebook and can be recovered at any time.” Yes, they surely have backups, and even though the company offers account deletion options, it’s likely that your data still lingers on backups somewhere.

A plan to “kill Facebook” would require not just knocking the social network offline for a day or two, but breaking into its databases and doing enough damage to scare users into staying away for good. In the past, other hacker groups have cracked into Sony’s online gaming servers and published customers’ names, home addresses, phone numbers, and passwords which many likely use elsewhere, such as their email and bank accounts. That caused widespread outrage and prompted Sony to offer an official apology, but it wasn’t enough to kill the PlayStation Network.

If hackers were to successfully break into Facebook and obtain personal information on even a fraction of its 750 million users, pandemonium would probably follow. In some countries, political activists who have used Facebook to coordinate their actions could be outed and face imprisonment, torture, and even murder. In America, many people’s lives could be messed up if their personal secrets were exposed to coworkers, family, and law enforcement.

Whoever made the video wants you to worry about the privacy of everything you’ve ever posted to Facebook. And you know what? You should. Far too many people treat Facebook as their friend, unthinkingly uploading information about themselves. They don’t understand the privacy settings, and it doesn’t occur to them that information they’ve set to “Only Me” might be seen not just by a clever hacker, but by a Facebook employee.

Ask anyone who’s ever been a system administrator at a business or school: Have you ever used your access to peek at someone’s email? For some IT people, it’s one of the job’s best perks.

That’s why Google placed extra lockdowns and restrictions on their employees in China: They were afraid the Chinese government would send in spies masquerading as honest employees, to pore through the email of dissidents and maybe steal the source code to Google itself.

The same thing could happen in Mountain View or San Francisco. All it takes is one corrupt employee, or one with a personal vendetta. Or London: How do we know the British government won’t demand access to Facebook – I don’t mean shutting it down, I mean poring through members accounts — to preserve law and order among London’s rioters?

Personally, I think Anonymous are a bunch of brats, but that doesn’t mean Operation Facebook doesn’t have a point.  Millions and millions of people post things to Facebook that they’re sure will never fall into the wrong hands, can never be seen by the wrong eyes. What are they thinking?

Vanessa Camones is the Founder and CEO of theMIX agency, a digital marketing consulting firm based in San Francisco, CA. And she has backed up her Facebook data. Follow her @Vanessacamones for ongoing data banter.