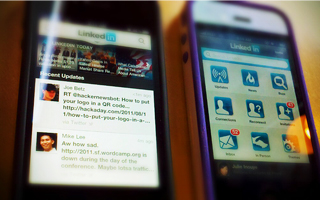 For many young professionals, it’s hard to imagine why you’d want to use a business social-networking site like LinkedIn on the go. It just doesn’t have the ubiquity of a Facebook or the hipness of an Instagram.

One glance at the company’s new mobile app, which is being released today for iOS, Android and mobile web browsers, will make all the reasons abundantly clear.

With a gorgeous interface that won respect even from Apple (the iOS app’s design garnered high marks from the App Store gatekeepers, according to our LinkedIn contacts), the LinkedIn app presents you with a quick glance at relevant news for your industry, as well as a snapshot of personal and professional updates from your contacts. It makes staying up-to-date on your business life a painless, quick and we daresay even fun process. 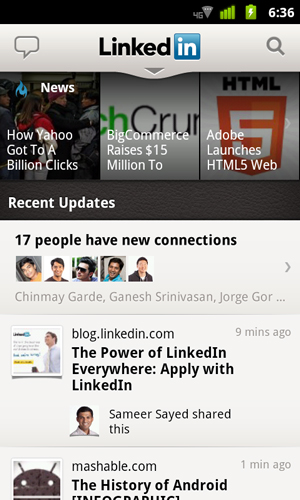 And according to LinkedIn mobile product chief Joff Redfern, it’s exactly what LinkedIn users want and are going to love.

Redfern told VentureBeat that mobile is the company’s fastest-growing consumer area. In fact, LinkedIn’s mobile usage has skyrocketed 400 percent in the past year, according to stats revealed during the company’s quarterly earnings call earlier this month.

This growth has taken place on the company’s existing suite of mobile apps, which have been around for several years. Looking at this side-by-side comparison with the new app, it’s easy to speculate that the company’s mobile traffic is set to shoot even higher in the months to come.

Pretty and pared-down, the new application for iPhone, Android and the mobile web (the mobile web app looks and behaves exactly like the native apps) presents a few intuitive ways to get the most pertinent and interesting information quickly, something Redfern said was the primary mission for the mobile team.

“We looked at the current app and asked, what are people really using? Then we brought those use cases center stage.”

The three scenarios Redfern and team said they have optimized for are the information junkie, the meeting-bound pro and the networker.

The home screen of the LinkedIn app caters to the first case. “We want to make you great at what you do,” said Redfern, who then explained that a lot of that has to do with staying informed about your industry and knowing what your colleagues are up to. The top bar of the app is a feed of personalized and curated news, and the remainder of the screen below it is a stream of updates from your contacts. It shows social updates from Twitter as well as reminders on who just got promoted or changed companies.

Then, there’s the profile view for those who are about to charge into a sales or other type of meeting. This view, said Redfern, is all about the user “knowing beforehand who he was meeting, what they’re posting on their blogs and Twitter. He gets a full view of what that person is all about, which helps him in a selling situation.” Redfern estimated LinkedIn will serve around half a billion profile views on the mobile apps this year and said the apps see around 14 people searches per second. 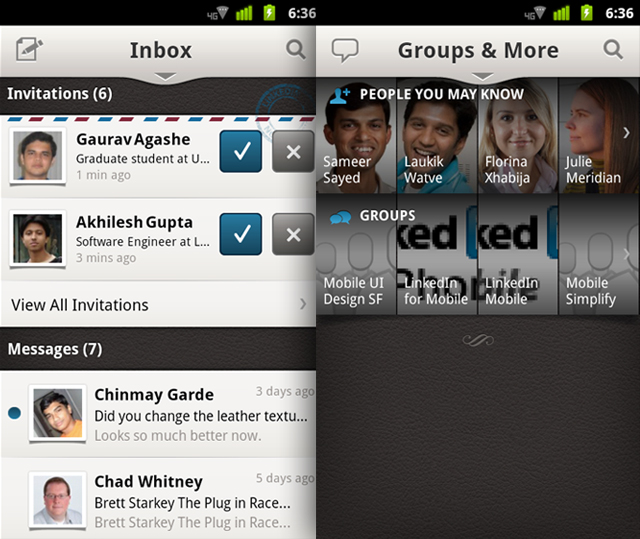 Finally, the mobile apps are optimized to allow users to grow their network and stay connected. In the new interface invitations are a one-click process. The LinkedIn app also gives Groups a large role. “We’re putting more than a million groups in people’s pockets,” said Redfern. “People can dial into groups to get up to date on conversations before they go into a real-world situation.”

Typically, LinkedIn’s demographic is a very educated, professional motivated and relatively affluent crowd. The users are in their early 30s to 50s. “On the mobile side, they tend to be active users,” said Redfern. “They’re well connected, active in several groups.”

While users typically balk at any small change, especially when they can’t find their “stuff” in an app, Redfern said of the new LinkedIn apps, “I think they’re gonna like it. We didn’t take it lightly. We brought in a whole set of outside users to give us feedback, and unanimously, people were behind what we had done. They were really delighted by it.” 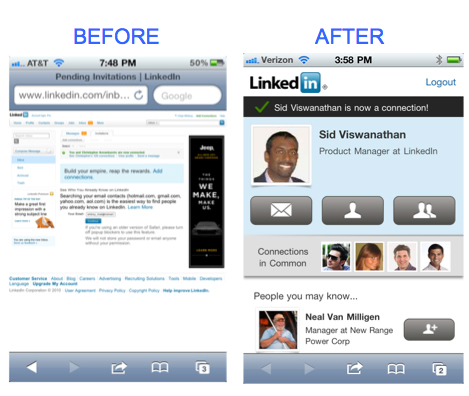 And more changes are still to come. Redfern and mobile development lead Kiran Prasad said they’re excited about upcoming features that are “still in the pipes. There are one or two LinkedIn products that are coming out soon that are going to make a lot of sense.”

But as Prasad pointed out, “This is step one. If we didn’t leave some stuff out, we’d never get to ship it.”