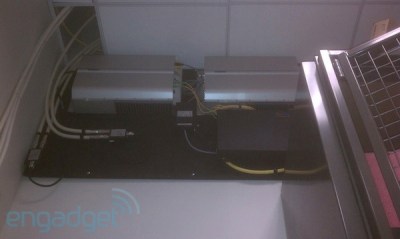 For some reason, a “major Apple store” is getting LTE 4G equipment installed by AT&T, Engadget reports.

An anonymous tipster sent Engadget the photo to the right as proof. With the iPhone 5 right around the corner, many are taking this as a sign that it may end up sporting 4G LTE — despite many other contrary signs.

A more likely reason: this prominent Apple store could be one of the first locations for Apple to test its LTE devices, which will most likely land next year. Yesterday we reported that Apple seems to be testing an LTE iPhone.

The key aspect holding back an LTE iPhone right now is battery life. Current LTE chipsets are major battery drains, and that doesn’t seem like the sort of thing Apple would allow in its next flagship phone. By next year, the chipsets will likely be thinner and more power efficient, making it more feasible to include LTE in the iPhone’s thin frame.