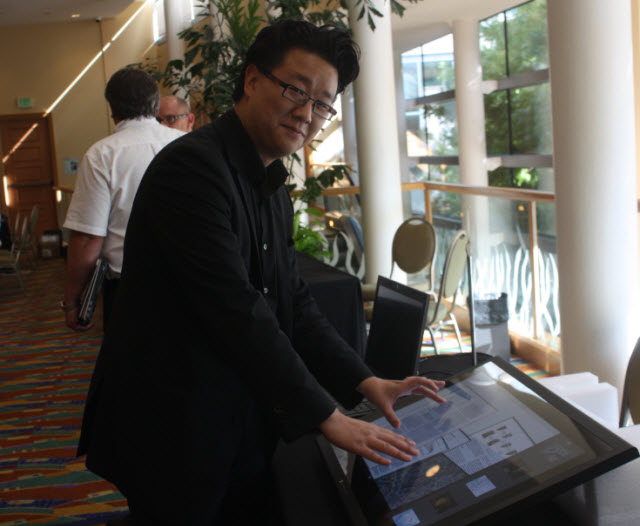 Give Jeff Han some credit. He’s working down a cost curve. Since 2006, Han’s company Perceptive Pixel has been working on some of the finest large touchscreen displays anywhere. He says that the company’s technology, which is used in the Magic Wall touchscreens used by broadcasters on election nights, are fast and accurate at detecting finger touches.

You can write on them at the same time you’re touching them with your finger. You can pinch to open a picture or toss it around the screen with speed. The only sticky thing is the cost. Aerospace companies and government agencies don’t mind paying $10,000 or so for a 27-inch screen and $100,000 for the company’s upcoming 82-inch screen. That has created a good business for Perceptive Pixel, which has 50 employees. (On pricing, Perceptive Pixel bundles high-end software and a computer platform with the display, so the $10,000 or so covers more than just the display).

But it’s not the mass market. Han estimates that an iPad is slower and less accurate than his displays, based on his measurements. Han’s display runs at 120 hertz (120 refreshes per second) while the iPad runs at 60 hertz and does 25 at rest. It’s not a fair fight yet because Han can spend so much more on the components, screen, and software inside his displays. But Steve Jobs might want to watch his back. Han’s company does hardware, software, and everything else it needs because most hardware out there “sucks.” He takes a very Apple-like approach to perfecting his displays. And one of these days, Perceptive Pixel might find a way to make these displays for a much lower price. In other words, Han wants to perfect the display first, and then bring it to masses.

We wrote a story about Han’s new 82-inch display yesterday, after he spoke at the Emerging Display Technologies conference, but Han is a pro at video and he is much more interesting explaining the technology as he uses it. Check out our video with Han below.