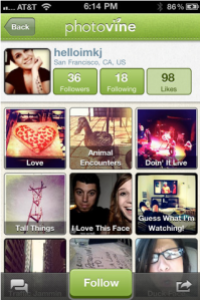 Today we are finally getting to play with photo sharing app Photovine, created by the team at Google-acquired Slide.

The app has been in invite-only, friends and family testing for months, with little more than a splash page to tease all of us strangers. A spokesperson for Slide tells VenutureBeat the concept for Photovine was conceived late last year by a team that was “very inspired by” the Nexus S intro video (posted below), which was the genesis of the “Where I Stand” vine featured in many pre-public release Photovine screenshots.

The Photovine app shares photos by stringing content themes into vines. These vines grow as people who participate in a given vine share their similar photo experiences. For example, you can share a photo of you and your friends at brunch and give it the caption “Perfect Weekend.” Your friends would share their own take on the “Perfect Weekend” vine by posting a photo of them boating, reading a book, on the dance floor, or whatever the caption means to them. The main Photovine features include:

* Browse vines — See photos and creative captions added by the Photovine community.
* Add a photo to a vine.
* Create a vine — Start a vine and watch it grow.  Be clever, witty, or literal; it will define the direction in which the vine grows.
* Follow people  — Find interesting people and follow them.
* Social sharing — Share photos and vines on Facebook and Twitter (no word yet on Google+ sharing).
* Loop your friends into a vine — Notify friends both in the app and outside of the app via email or app notifications. 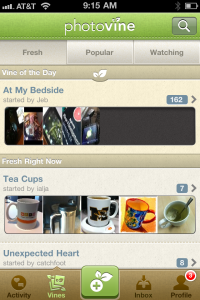 Photovine wasn’t released in a hurry. Perhaps this was a way to avoid any sort of Color catastrophe (a photosharing app with lots of funding and hype but few dedicated users). The months of friends and family testing resulted in a substantial early user base. Because sharing isn’t necessarily location-based (it can be), Photovine doesn’t need a heavy concentration of users. The app does require creative users who are willing to share openly with strangers and friends alike. Timid users who don’t want their images seen by the masses will not help vines grow. Perhaps the app would benefit from the Google+ Circles concept.

Speaking of Google, the company’s other photo-sharing app, Pool Party, is still in invite-only.

The release hasn’t been drama-free. Photo-sharing app Piictu is claiming Photovine is a carbon copy of its app and is circulating a side-by-side comparison of the two apps. A Google spokesperson says “Photovine is a photo-sharing app built by a few folks at Slide, who conceived and starting building the product late last year, long before we knew Piictu existed.”

It’s hard not to be accused of copying in a market as crowded as photo sharing. There are apps that place emphasis on photo filters like Instagram and Streamzoo. Other apps compete in the photo browsing space, like Cooliris. Social networks are dabbling in their own photo sharing apps. For example, Twitter just launched its own photo-sharing features to compete with well-known third-party services including Twitpic and Yfrog. Photovine will have to compete with these apps and hundreds of others.

My first reaction to Photovine is “sweet.” It certainly gets you thinking about new ways to connect with people you know and total strangers. The “Vine of the Day” today is titled “At My Bedside.” It gives you the chance to be a bit of a snoop and see what people keep next to their beds. Imagine an “Inside my Medicine Cabinet” vine. The “Unexpected Heart” vine was fun to explore, and I had a few of my own to contribute. We’ll see if users heart Photovine in the coming months.