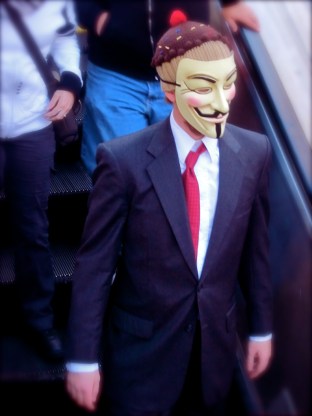 The ephemeral, anarchic group known as Anonymous is credited with shutting down trains and publishing the personal information of transit police in San Francisco this week. And yet its decentralized nature means there’s little agreement about the organization’s methods.

Hackers found and published the personal information of 100 Bay Area Rapid Transit police this week. Ostensibly, Anonymous was behind the leak, as many have reported. But it’s hard to say precisely who was responsible, because of Anonymous’s intentional lack of structure and organization.

Just finding an official spokesperson for Anonymous is impossible. Although news stories frequently cite the Twitter accounts @AnonyOps and @AnonOps, neither is an official channel. In fact, several other Twitter accounts frequently speak for the group, including @anonymouSabu, @AnonymousIRC, @YourAnonNews, @AnonymousPress, and many more. These twitter handles often cite and retweet each other. But none of them are the “official” mouthpiece, and indeed the group doesn’t even have a single point of view.

“There is no hierarchy, there is no one voice,” the anonymous person behind @AnonyOps told VentureBeat.

To many of its members, Anonymous is just an idea, a movement. Many people may choose to associate themselves or their actions with Anonymous, but no one has to agree with what the others do. Anonymous is not unanimous, AnonyOps wrote in an open letter to the media.

“The problem Anonymous has is that we, being leaderless, can’t say who is and who isn’t Anonymous,” AnonyOps said. “There’s no one at the helm. There are only the few with a bullhorn, like me.”

In fact, many “members” of Anonymous don’t even know one another. When talking about the San Francisco BART protest on Monday, AnonyOps admitted not knowing the people on the ground in San Francisco.

That’s a weakness as well as a strength.

“A former military man send me a message today,” AnonyOps explained. “‘[Anonymous] will destabilize from within through unfriendly infiltration without structural integrity through hierarchy.’ He had a very valid point.”

In other words, without leadership, Anonymous will have trouble remaining cohesive. It can’t stop people from using its name. It can’t tell people they don’t belong, and eventually it may disintegrate into chaos.

But for now, it has at least one coherent core, according to AnonyOps.

“Anonymous is all about privacy,” he or she told VentureBeat.

What? That’s a striking statement to make about an organization that just published private details about a number of BART police.

“We can’t control what people do in the name of Anonymous,” AnonyOps said. “It was completely irresponsible of people to take private information and make it available. It shouldn’t have happened.”

AnonyOps is one of Anonymous’ members that doesn’t believe in exposing personal data. There is a side of Anonymous that acts “for good” to get messages out through social media, YouTube, propaganda and now protests, he or she says.

AnonyOps played his own role in the protest against BART police on Monday, known as #opBart  after the Twitter hashtag used to organize it. 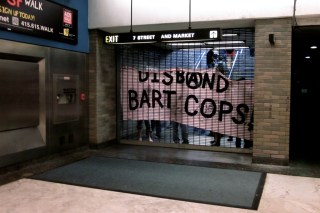 During the protest, AnonyOps monitored and live-tweeted BART central command radio communications. When a radio transmition mentioned a BART station being closed, he used a tweet and the hashtag to tell protesters on the ground to move forward.

But what makes Anonymous move on an operation? If there is no commanding general, no drummer boy, how does the “group” know where to go?

“These things spread through the hydra like things do on the Internet…virally,” he or she explained. “There’s a loose coordination of efforts and information. It isn’t by any stretch organized, and there are no official channels (that I know of). Things happen organically.”

In the case of #opBart, it may have been as simple as a pair of tweets.

One tweet by David House, aka @Lockean, read, “Politicians would do well to address the underlying motives behind unrest instead of the tools by which unrest is carried out.”

Though it didn’t directly mention BART, it was a piece of inspiration.

The next tweet by @mediapathic said, “I find it hilarious that Bart responded to a threat to disrupt a service by disrupting a service. What is this, a race to the 3rd world?”

AnonyOps explained, “Add those to the mix, and people’s emotions get them to a point where they want to take action.”

According to AnonyOps, those tweets, along with tweets from Jake Appelbaum, aka @ioerror, spurred action because of the respect people feel for the individuals.

“David and Jake are respected men in their fields, especially among security and privacy folks, many of which are also in Anonymous. So when these men cry foul, people take notice.”

opBart an outright success just yet.

“It’s too early to tell,” he explained. “I’m not sure the protests are done. I’ve no knowledge personally with regard to anyone on the ground in San Fran, but I suspect it isn’t over.”

In fact, the Twitter handle created for OpBart announced a second protest in the works for August 22 at Civic Center BART station again.

What about the Facebook attack seemingly planned for November 5th? Many of Anonymous’ members denounced its existence, including high-profile member Sabu, who tweeted, “ATTN Media: Don’t get trolled by trolls pushing for #opFacebook. It simply does not exist. Even if we get 100,000,000 people to delete accts.”

AnonyOps said, “The rhetoric related to #opFacebook was directed at users. That’s wrong. Any effort that would have privacy implications for private citizens I’m skeptical of.”

Sabu, who tweets from @anonymouSabu seems to take the opposite view on Anonymous’ operations.

So, is Anonymous able to mobilize on a bigger scale? Perhaps, but for now Anonymous remains an idea. It’s a blanket statement under which people act.