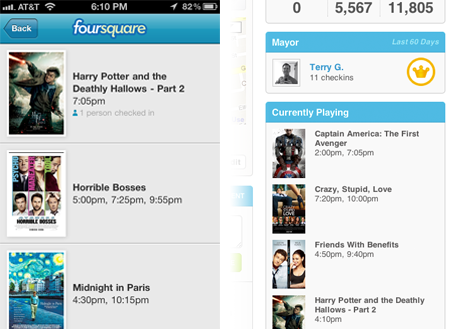 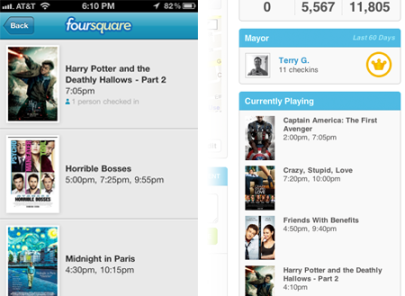 Location-based social network Foursquare now allows its users to check in at specific events, the company announced today on its blog.

The new check-in feature means time-specific events such as movies, concerts and sports games will all be treated the same way as locations. So, in addition to checking in to a specific venue (a.k.a. location) using Foursquare on a mobile device, people can now choose the event itself.

For example, when attending a Titans Football game in Nashville, I can check in to the specific game and not just “LP Field.” The location data will automatically be included in the update.

Many people already treat events as if they were venues, but the new support for events should give people an added layer of interaction. Facebook has had this type of functionality for quite a while now.

The company said it will enable event check-ins for over 50,000 venues, and each event will appear a few hours before it begins. Foursquare already has partnerships set up with ESPN, Movietickets.com and Songkick.

I would imagine those partnerships could easily extend to television networks in the future — should Foursquare decide to go that deep into event-like check-ins. It also begs the question of where this new check-in feature leaves services like Miso and GetGlue, which specialize in check-ins for entertainment viewing.

“Our service is centered around more than just checking in,” said Miso CEO Somrat Niyogi. His company provides a service (which has about 200,000 users) that allows people to check-in, rate, comment and complete quizes while watching things on television, or as he calls it “the second screen at home”.

“In terms of our space (business), I don’t think Foursquare’s new feature will affect us at all,” Niyogi said, adding that Miso is less concerned with the experience when people are out and about — more focused on the experience while sitting at home. “For GetGlue, where all they do is checking in and giving our rewards, I think they’re going to have more of a challenge.”

While fewer people may end up using services like Miso and GetGlue when in the movie theater, ultimately it’ll come down to how innovative those companies are in the future, Niyogi said.

“For the companies that are just strictly relying on check-ins of movies and such, they are probably screwed,” he said. “You’ve got to differentiate your service.”

The New York-based startup received a new $50 million round of funding in June to hire additional engineers and expand its platform beyond location-based services. Foursquare has raised a total of $71.4 million to date.

The image above is a screenshot of an event check-in using Foursquare’s iPhone app.