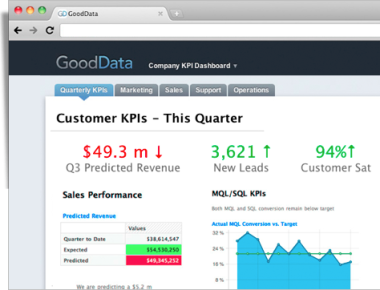 GoodData, a provider of online business intelligence software, announced today that it has raised $15 million in its second round of funding.

The company runs an online business intelligence service that tracks data from a number of sources — such as customer acquisition or customer relationship management software providers like Salesforce.com — and wraps it up in a neat, easy-to-digest package. It then gives business owners a number of analytics tools for that data, like projections for revenue and growth.

The funding was led by Andreessen-Horowitz.

The company’s chief executive and founder, Roman Stanek, has a pretty stellar track record — which was a large factor that led to Andreessen-Horowitz’ investment. Prior to GoodData, Stanek founded Java development company NetBeans, which he sold to Sun Microsystems. After that, he founded Systinet, which he sold to Mercury Interactive (Hewlett-Packard would go on to acquire that company in 2006).

Likewise, GoodData plans to partner with as many enterprises that generate valuable business data as it can. O’Farrell said that has become a critical strategy for smaller companies and startups lately if they want to compete with enterprise supergiants like SAP and Oracle. And most enterprises are more open to partnerships now than they were a decade ago, he said.

“My vision is to support every single software-as-a-service application out there, I want to have an extensive library or app store of GoodData applications,” Stanek told VentureBeat. “Business Intelligence was very successful, we can connect to a data source within a matter of minutes and start analyzing it.”

Public trading markets have taken a significant beating lately and experienced a lot of volatility — but that isn’t deterring venture capital investing, O’Farrell said. Cloud computing companies in particular are gathering an enormous amount of interest thanks to the massive markets they attack with very little upfront capital costs, he said. Andreessen-Horowitz in particular will continue to invest in those companies, he said.

“Great companies will always be funded whether the market is up or down,” O’Farrell said. “If we see a great company at a stage where it makes sense for us to invest, market conditions would not deter us.”

Stanek said he expects to use the funding to build up its sales team. GoodData launched in 2009 and has raised $29 million to date.