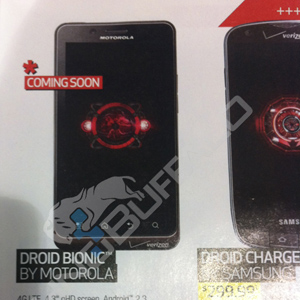 Just days after a photos of Motorola’s upcoming Droid Bionic leaked, new details have emerged that point to the anticipated device’s launch in Sept. with a $299 price tag.

Interest in Motorola Android phones is especially high this week, as Google announced plans Monday to acquire Motorola Mobility — news that has shaken up the mobile industry and made many pundits wonder what this means for the Android OS. Google says Motorola will be run as a separate business from Google and that it will continue manufacturing Android phones.

The Droid Bionic should launch on Sept. 8, according to an internal Verizon document from Droid Life. Best Buy advertising materials leaked by Techno Buffalo feature the Bionic and confirm the unit will have many of the specs previously announced for the phone and that a launch is imminent.

The 4G LTE-enabled Droid Bionic smartphone was originally supposed to launch on Verizon in the second quarter, but Motorola delayed the device. A leaked spec page from Motorola says the device features a Texas Instruments 1-GHz dual-core processor, 1GB of RAM, an 8-megapixel camera, and a 4.3-inch display with qHD 540 x 960 resolution.

To go along with Bionic, there’s also the Motorola Droid HD on the way. According to leaked photos, the Droid HD is running the Gingerbread version of Android and features a 4.5-inch display (with Moto’s qHD 540-by-960 pixel resolution or perhaps 1280-by-720 resolution), an 8-megapixel rear-facing camera that takes 1080p video, and a front-facing camera.

Are you interested in picking up a Droid Bionic or the Droid HD?