The mobile application business is projected to reach $38 billion by 2015, but will the boom be global or will it be confined to a handful of innovation hotspots? A recent study of Android app creators that my company, AppsGeyser, conducted indicates that it will be both.

We drew the data from a sample of 10,000 apps that were created using appsgeyser.com between June and August, 2011. From that information, we collected the App makers’ IP addresses and used then to create this map. 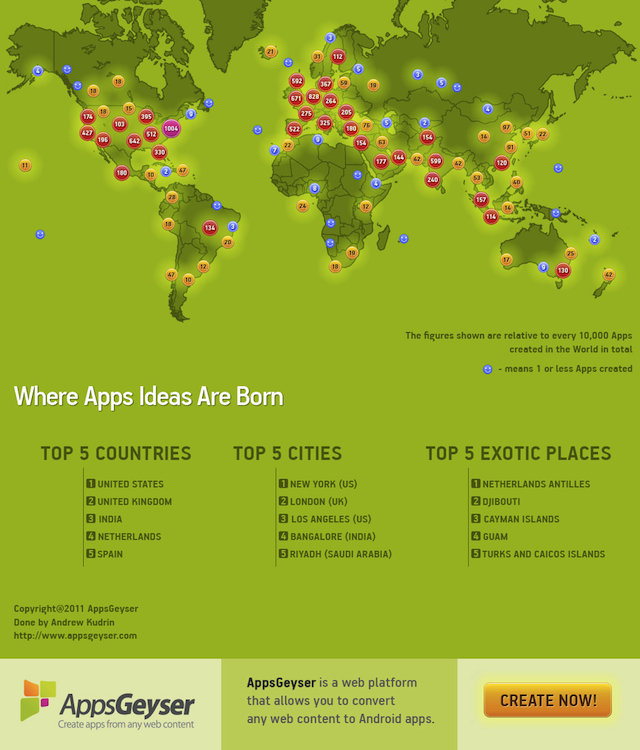 In addition to the usual suspects — New York, San Francisco, London — there were a few surprise cities in the rankings. Here’s a closer look at some of the notable cities on the list.

New York City:  New York brings the advertising, business and technology industries together in one location. It’s the number two spot for venture funding after Silicon Valley, so it’s no surprise that most of the world’s apps are created there.

Los Angeles:  LA has the second largest number of app creators per square mile in the U.S. One reason is that most of LA’s apps include video, and Hollywood is the world leader in creating video content.

San Francisco: The city by the bay actually scores low on the App Ideas map (see below for potential study weaknesses). App makers in the region have access to a large pool of development resources and venture capital, so their app ideas go through Idea -> Feedback -> Develop -> Invest cycles rather than the Idea -> Go-to-Market cycle.

Kansas City: One of the highest ranking cities in the U.S. for app creators per square mile is Kansas City. This could be a result of the efforts and investments made by the Kauffman foundation to generate entrepreneurial support systems in Kansas, and it could give hope to other cities and regions that have invested heavily into efforts to replicate the “silicon valley effect.”

London: Europe’s largest megalopolis definitely contributes a lot to the mobile sector. London has the highest number of apps created of any city outside of the U.S.

Amsterdam:  Dutch cities in general rank high on the global list of app creators per square mile. This is in part because the mobile market is very well developed in the Netherlands.

Bangalore: The second largest source for app ideas is in India. Although Bangalore is well established as the Indian IT capital, it has historically been an outsourcing hub. One reason for its ranking could be that the city is filled with highly skilled technology workers who have tools that get apps to market faster.

Riyadh: And Riyadh, Saudi Arabia comes in at number five on the list of world cities. This region generated just four times fewer apps than the New York metropolitan area, which means that the chasm between developed and developing markets is decreasing for mobile development.

Since AppsGeyser allows for the quick prototyping of apps, our data shows where app ideas come from.  The markets with high creativity might not necessarily have the systems and infrastructure in place to turn those ideas into viable businesses. It is a good indicator of what cities could turn into startup hotbeds if investors, governments and the academic sector provide support for budding mobile entrepreneurs.

Estuardo Robles is the vice president of AppsGeyser. He’s a frequent speaker and adviser on entrepreneurship and economic development. He lives in Austin.