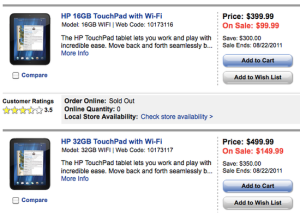 After Hewlett-Packard announced it was killing its webOS devices, many of us were left wondering what the company planned to do about the numerous TouchPad tablets still sitting on retail shelves.

An answer might be right around the corner if Best Buy’s Canadian retail stores are any indication. The 16 GB and 32 GB TouchPad models will go on sale in Canada for $99 and $149, respectively, according to a memo cited by PreCentral. That’s a whopping $300 dollars off the original retail price.

Interestingly, that’s exactly what we speculated HP would do in our VentureBeat news planning meeting yesterday (see below for the video).

It’s likely that a TouchPad price drop will soon make its way to the U.S. Right now it’s unknown just how much HP will lower the price.

The company first released the TouchPad at a $499 price point last month to lukewarm reviews and lackluster sales. HP went as far as to permanently reduce the TouchPad’s price by $100 last week to spur sales, but now it seems like the company was just trying to get rid of its TouchPad stock as quickly as possible — especially for partners like Best Buy, which has over 240,000 unsold TouchPads still in stock.

The hardware might not be all that great. HP reportedly found, in internal tests, that webOS ran twice as fast on the iPad as it did on the TouchPad.

Will you be purchasing a TouchPad if the prices drop to $99-$149? Let us know in the comments.