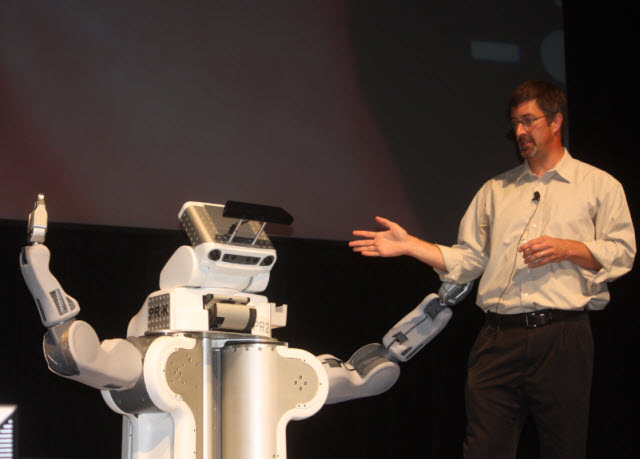 If the past 50 years saw the rise of industrial robots, the next 50 will be about the age of personal robots. 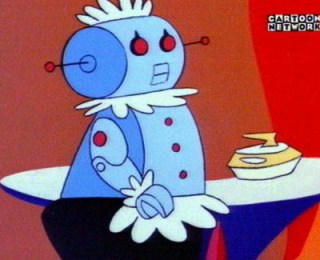 That’s the view of Steve Cousins (pictured above), chief executive of Willow Garage, the Menlo Park, Calif.-based maker of personal robots like the PR 2, the robot he’s introducing onstage. At last week’s Hot Chips conference at Stanford University, Cousins demonstrated what his 450-pound personal robot could do, from giving high fives to navigating the stage without falling off.

For $400,000, you can have the PR 2 bake you cookies or deliver the office mail to your employees. As technology gets better, Cousins promised that these personal servants will be able to do more and more work that humans don’t want to do, much like Rosie from the Jetsons cartoon show.

“The idea was to perform work that Rosie could do, without the attitude,” said Cousins.

He added, “For personal robots, that’s the next 50 years. Industrial robots have been successful. But it’s not about fiction. Now they can navigate an environment and see things you’ve left on the floor that don’t belong there.”

We’ve included several videos of the PR 2 in action at the bottom of this post, so scroll down to watch those, or read on to learn where Willow Garage’s robots came from and what they can do.

Robots have been part of literature and science fiction for decades. But the most useful robots for the past few decades have been used in industrial applications, not interacting with humans in the home the way Rosie did. That might be about to change, thanks to advances in robotics and new federal investments.

Cousins said that useful industrial robots trace their roots to George Devol, who died last week at the age of 99. Devol invented an early robot arm and applied for a patent on it in 1954, and appeared with his huge robot arm on Johnny Carson’s Tonight Show (pictured right) in 1966. In the video, Devol’s robot successfully putted a golf ball into a hole. 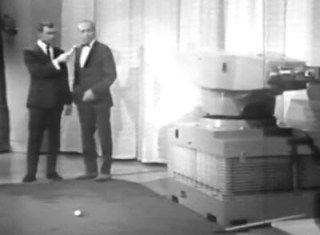 Early industrial robots made people afraid that they would replace human workers, eliminating their jobs. Indeed, over the decades, robots came into their own in places like car factories and many other manufacturing plants. But there are still factories, like Foxconn’s giant assembly factories in China, that employ hundreds of thousands of people, although even Foxconn is contemplating replacing workers with robots.

The irony of the latest generation of robots is that they could make cheap overseas labor obsolete and could thus bring manufacturing back to the United States, where product shipping costs are lower.

President Barack Obama  (pictured below) announced last month that the U.S. would help fund the Advanced Manufacturing Partnership, a $500 million program aimed at using “next generation robotics” to work closely with humans to carry out tasks.

In describing that effort, Matt Mason, head of Carnegie Mellon University’s Robotics Institute, said that the greatest value for robots is not doing “dull, dirty and dangerous jobs” but in working with people. 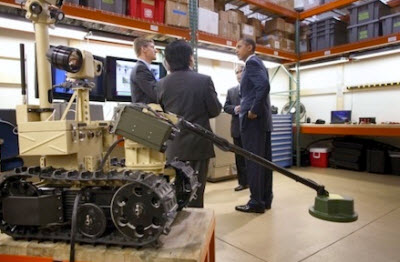 That’s the belief at Willow Garage, which was started in 2006 by Cousins, a former IBM researcher. About a third of the company’s team is made of robotics researchers who have expertise in a wide variety of topics such as perception, grasping, and human-robot interaction. The company is creating open source robotics software in hopes of advancing the personal robotics community.

“We’ve basically saturated the market for robots doing work inside a cage,” Cousins said in his speech at Hot Chips. “There’s now a need to get robots moving around outside the cage with people.”

Personal robots have been little more than expensive curiosities for years. But iRobot introduced the Roomba vacuum-cleaning robot in 2002 and it has sold more than 5 million units. That helped get the personal robot market off the ground. The newest Roombas can be programmed to do a variety of tasks, but they’re still somewhat limited.

A catalyst for innovation

Willow Garage’s previous model, the PR 1 robot, got its start at the Stanford University Personal Robotics program (an effort headed by professor Kenneth Salisbury and grad students Eric Berger and Keenan Wyrobek) and it got a lot of laughs in this video where it tries to operate and then tosses away a broken Roomba. The Willow Garage team tried to create a self-driving robot car as part of a challenge sponsored by the Defense Advanced Research Projects Agency, but Cousins said the team started relatively late and didn’t do so well in its first attempt.

The PR 2 has dual-chip Intel-based i7 chip (code-named Nehalem) in it with 16 cores, or computing brains. It has 24 gigabytes of main memory and 1.5 terabytes of hard disk space. The PR 2 has wheels, so, like a Dalek, it can’t move up and down stairs (for now). It runs on embedded Linux software, dubbed the Robot Operating System.

“It’s pretty beefy, but it runs hot,” he said. “About 60 percent of the battery is consumed by the computers.”

The robot fingers are gentle enough to pick up an egg, thanks to 15 sensors in the robot hand. The system has two stereo 3D cameras to figure out distance, and a high-resolution video camera. Laser sensors can also detect all of the walls in a space. One of the tough things robots have to deal with is different lighting conditions in rooms. But Cousins said the team attached a cheap $149 Kinect sensor on top of the robot to help with mapping a room in three dimensions.

“Before that came out, we had sensors that weren’t that great compared to your eyes,” he said.

Each joint in the robot has a motor as well as sensors that measure exactly how much the motor moves and in what direction so the robot knows where each limb is. The robot is controlled via a tablet computer.

And while the PR 2 is expensive, this age of personal robots is a lot like the birth of personal computing in the 1970s, Cousins said. The $400,000 cost of the PR 2 is in the same range as the $200,000 or so Xerox Alto, the first personal computer designed at the Xerox Palo Alto Research Lab in Palo Alto, Calif., in 1973. A decade later, Apple and IBM found tremendous success selling personal computers for just a few thousand dollars.

Cousins says it could be 10 or 15 years before the price for personal robots drops comparably and you see a robot in every home. But each new generation of technology is getting the dream closer to reality. Google has made great advances in self-driving cars, as have others, but those cars still need human override options to prevent accidents. In Germany, a kitchen robot can cook pancakes and serve around four of them per hour.

In the meantime, Willow Garage is trying to stimulate development of personal robotics.

Upon completion of the PR 2, Willow Garage gave away 11 of the robots to researchers. It has also made a version with just one robot arm that sells for $285,000.

Cousins said he still wants chip makers to keep making advances in low-power computing. The PR 2 has to have a lot of fans that cool the 16 cores inside the robot. He says that we need better human-robot interaction, mobility, manipulation, perception and real-time control. He also wants waits to get rid of wiring for the motors and other devices within the robot. He wants specialized processors to handle various tasks and hobbyist access to technologies, as Microsoft made possible with the Kinect software development kit. He needs faster communications and cloud-based computation, as well as advances in shared memory.

Among the most important things the robot can do, Cousins joked, is open a bottle of beer.

But there are other applications. Robots could do tasks for disabled people, act as a kind of sophisticated remote webcam, or do tasks for you from afar.

Remote-presence robots could be used in workplaces where people want to place webcams in rooms that can show off a variety of things in the room, such as the people talking or the white board. These webcams are better if they’re mobile and can be moved from one part of an office to another.

Mundane tasks aren’t out of the question, either. Researchers at Bosch have programmed a PR 2 to pick up mail and distribute it to employees without running into obstacles in an office.

Over the course of five days, the researchers at Willow Garage taught a robot how to play pool. The team used modified billiard balls, which are just two different colors, so that it was easier to track where the balls are. The robot was able to make long shots and shots from tough angles.

Take a look at some of the other tasks Willow Garage’s robots can do in the videos below.

Here’s a video of the PR 2 in action at the Hot Chips conference.

This shows how a PR 2 robot can bake cookies from scratch.

This PR 2 robot is performing tasks at Bosch.

This video shows how personal robots can help people with disabilities.