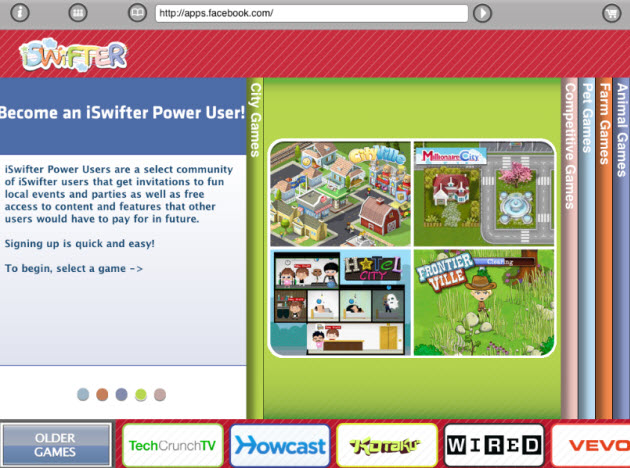 iSwifter, a company that streams Flash-based Facebook games so they can be played on the iPad, said today that it expects to generate more than $10 million in revenue in 2011, based on current bookings.

That’s remarkably good traction for a startup that is still in its first year. Peter Relan, executive chairman of Burlingame, Calif.-based iSwifter, said in an interview that the company is having great success with the iSwifter app that it launched earlier this year. The iSwifter app uses streaming technology to deliver apps and games that would not otherwise work on an iPad. The fast growth of the business means that iSwifter is able to fund its own growth.

Flash games don’t work on the iPad because Apple and Adobe can’t come to an agreement about the multimedia technology. That’s a problem since a lot of popular Flash-based games are available on Facebook. That’s where the iSwifter application comes in — it can stream those Facebook games to a special browser in a user’s iPad. That streamed game functions just as if it were a native app stored on the iPad itself.

Rajat Gupta, founder of iSwifter, said in an interview that the company’s technology can be applied to many other kinds of apps. And Relan said iSwiter is having success licensing its technology to other kinds of companies, such as enterprises or healthcare companies that want to get their enterprise software to work on an iPad.

“We want to be the Netflix of applications,” Gupta said. Added Relan, “Games are just a leading indicator of what we can stream.”

Gupta said the company has eight employees now and would like to hire as many as 40 this year to expand its business. Among the new hires is Ajit Mayya, an eight-year veteran of VMware, who will lead iSwifter’s engineers as vice president of engienering. Mayya will hire a number of new engineers to build out the company’s platform.

People who use iSwifter to play Flash-based games such as CityVille or Empires & Allies on the iPad, are willing to pay iSwifter for that capability, even though the games are free to play on Facebook. iSwifter has hundreds of thousands of users who have spent millions of minutes with the app. Over time, Relan wants the huge reservoir of non-iPad apps to migrate onto new mobile platforms such as the iPad.

Users can get the iSwifter app with a regular web browser that can play Flash videos and other web content on an iPad for a flat fee of $4.99. Both deliver Flash and game content — including any social games or massively multiplayer online games.

Early versions of iSwifter let users watch videos and play a limited number of Flash games on an iPad. But version 3.0 allowed you to log into Facebook and play a variety of Flash-based games such as FarmVille.

Apple approved the early versions of iSwifter without much interchange, but the 3.0 approval process was lengthier and tougher because iSwifter introduced a new subscription feature. Gupta said he wanted to launch a subscription service where a user would sign up once for iSwifter and the subscription would automatically renew at the end of each month. But Apple balked and required that iSwifter’s users approve the subscription at the end of every month. That way, users wouldn’t get surprised by monthly bills. Now, to reduce confusion, iSwifter has eliminated the subscriptions in favor of a single download fee. With version 4.0, users can download the for free and test it out for a half hour. If they like it, they can pay the one-time flat fee to continue using it.

When you load the app, you have two options. You can browse web sites or play games. With the web sites, you can choose from one of the featured links or just type in the web address to go to any web site. There is one game that is available for free each week. The others are available as free-to-play games. After a couple of minutes of playing, the user is prompted to make an in-app purchase to continue playing. If there is a drawback to iSwifter, it is that it needs a constant Wi-Fi connection in order to run, as the video has to be streamed in near real-time to create a seamless experience for the user. Gupta said that the amount of bandwidth required to support the app isn’t huge.