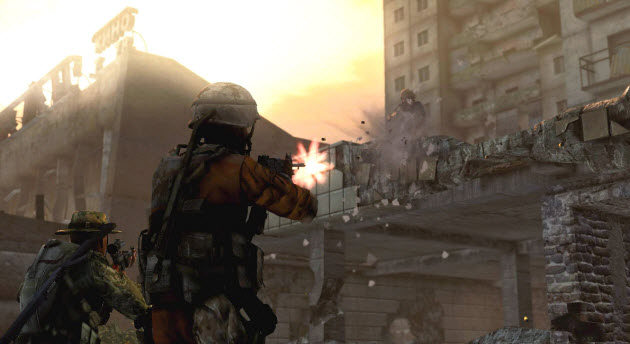 Paris-based Cybergun, a maker of fancy toy guns, said today that it has acquired 50 percent of Online Warmongers, the maker of the free-to-play online game War Inc. Battlezone.

The company didn’t say how much it paid for the transaction, but we heard from two sources it was based on a pretty large valuation of $50 million, which would mean Cybergun paid $25 million for its stake.

War Inc. Battlezone is a third-person online shooting game (pictured) for the PC. It uses a free-to-play model, where users can play for free, but pay real money to purchase virtual goods such as more weapons, ammunition or experience points.

“This strategic investment is a great opportunity not only for the activity of Cybergun Video Games, but also for the sale of retail products’, said Cybergun in a statement.

Los Angeles-based Online Warmongers said in July that it would launch its web-based game in a number of territories around the world. The title is an attempt to go after the Call of Duty game fans who don’t want to dish out $60 for each title. Online Warmongers bills the game as a realistic combat game with stunning visuals, especially for an online-only game. Rival games include Battlefield Heroes, which is published by Electronic Arts, and Combat Arms, published by Nexon.

The game is the first to launch as part of a collaboration with [a]list games (that’s how they spell it), a Pasadena, Calif.-based marketing and distribution company that offers its services in exchange for a share of revenues or some other form of payment. [a]list games will promote the title in North America, Europe and Australia.

Moscow-based Syncopate has published the game online in Russia and other Russian-speaking territories, where the game has been made an official tournament title in World Cyber Games Russia. Players join the ranks of Paramilitary Commando Units, or mercenaries who fight anarchists. As many as 64 players can be in the same arena at once. Players can buy virtual items such as weapon enhancements or clothing.

Online Warmongers developed the game using the Eclipse Game Engine, a foundation for game graphics created by Arktos Entertainment Group. It promises an experience that isn’t so far from high-definition console games.