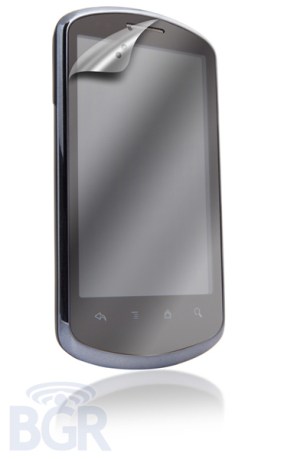 AT&T has yet to launch its LTE 4G network, but we’re already seeing spy shots of possible models of its LTE phones.

Today we have a glimpse at the Samsung Impulse 4G, which could very well end up being AT&T’s first LTE 4G phone, according to the mobile site Boy Genius Report.

There aren’t any details available yet for the Impulse, but as BGR points out, it looks strikingly similar to Samsung’s Droid Charge on Verizon. That phone sports a 1 gigahertz processor (surprisingly, not dual core), 8 megapixel rear camera, 1.3 megapixel front camera and a 4.3-inch Super AMOLED Plus display. Given that pretty much every new Android phone is dual-core these days, I suspect Samsung will upgrade the processor for the Impulse 4G.

AT&T is still far behind Verizon in terms of its LTE 4G deployment and phone availability, but we’ll likely see it doing some major catching up during the rest of the year. AT&T launched two LTE devices this week, the USBConnect Momentum 4G and Mobile Hotspot Elevate 4G, but they won’t be able to take advantage of the carrier’s LTE network until it actually launches. The company previously said it plans to launch LTE in five cities this summer.

Verizon, meanwhile, is seemingly bringing LTE 4G to new cities every few weeks. The carrier has brought LTE to more than 117 cities since it launched late last year, and it expects to cover 185 million Americans with LTE by the end of the year. By the end of 2013, Verizon says, the entire country will be covered by its LTE network.