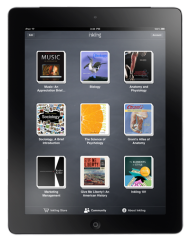 Imagine a classroom living inside your textbook, constantly chattering and available to answer your questions. That’s what digital textbook creator Inkling wants to bring students with its announcement of social functions for its iPad app.

“The idea is that whenever you download any Inkling title, you have the collective wisdom of anyone else who has been in that book,” Matt MacInnis, Inkling founder and chief executive told VentureBeat in an interview.

Inkling takes textbook content licensed from publishers and turns the otherwise static material into an interactive app. In the app you can still read the same traditional textbook content, but you can also view 3D images such as a molecules or monuments, test your knowledge, access definitions, listen to a speech or symphony while you learn, highlight content and save highlights and notes in a sidebar notebook for later. Book costs vary, but to lower the cost, students can even purchase one chapter at a time.

But learning is a social activity and students oftentimes benefit from collaboration. That is why Inkling has integrated social capabilities directly into the app. Now, students can leave a public note in the margin of their Inkling book, and save others’ notes and highlights to their notebooks. The comments of professors or other experts are distinguished from peer commentary through color coding: Student contributions are denoted in blue in line with the text, while professors’ posts show up in purple. Your own highlights and notes appear blue. 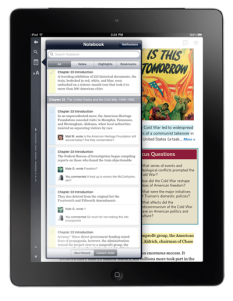 Students have the choice to follow specific people and watch their edits as they simultaneous move through the same downloaded book.

In the upper right hand corner of the app, shared comments and highlights, or posts, are aggregated. Post notifications are separated into notes from followed users, your own posts, and “suggested” posts. The app suggests posts based on a scoring system, which ranks user “intelligence.” This rank is most heavily based on how often a person puts your posts into their notebooks and how well you do on practice tests.  A post will only show up in your notebook if you find it valuable and manually choose to save it there.

Students can opt out of the social features entirely or make specific posts private.

In essence, the app becomes a study group. MacInnis used the example of a stuck student. He can write a note next to the content that confuses him, go to sleep and wake up with a crowdsourced explanation in the next morning.

But these textbooks can be very heavy on an iPad. A full Inkling textbook can fill up 2 gigabytes of space, and for someone has a 16GB iPad, that’s a lot of precious space. The only way to combat this is to delete Inkling titles to download new ones. But what happens to all that data that will now be even more extensive with the social features function? According to MacInnis, this data is synced in the cloud and repopulates itself when a title is re-downloaded.

Still, you have to re-download a 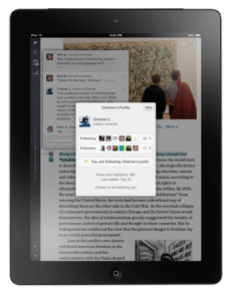 book if you want to add it back to your iPad.

“From our perspective, we’re solving for a very specific problem. There’s no scalable way to publish digital content for learning. They [Kno] know how to dump a PDF on a screen, but we have a whole infrastructure to publish this stuff at scale,” said MacInnis. He continued, adding Chegg to the conversation, “They’re taking a PDF and they’re putting it on an iPad or computer screen. That’s fine for now, but it’s not the future of publishing.”

To MacInnis, Inkling isn’t creating an eBook, it’s looking toward a new way of experiencing educational content through apps. What once was a still and mute book, now uses technology to move, speak out loud and glean intelligence from others outside your comfortable campus study group, all from one device.

“On a basic level, this social stuff is what it is,” MacInnis explained, understanding that social is everywhere and the ability to interact with the world is much easier than it once was. “But we think the implications are huge.”