“We’ve been in close contact with Redditgifts for about a year. Not (to talk) about acquiring them, but just trying to find out how we could help,” Reddit General Manager Erik Martin told VentureBeat. Reddit didn’t begin discussions to purchase Redditgifts until just after the last gift exchange event in late June, he said.

For each event, Reddit users voluntarily sign up to participate in the exchange — filling out a profile of what they like and dislike as well as providing a link to their Reddit profile activity. Each participant is then randomly assigned a single Reddit user, who they will purchase a gift for.

The process of using a person’s Reddit activity to determine a thoughtful gift is surprisingly well-tailored for an activity like Secret Santa. (To better illustrate the process, I’ve embedded a photo of the first gift I received from the exchange: A microwave bacon crisper outfitted with images from the classic sci-fi TV show Doctor Who. Oddly enough, I listed only “Doctor Who” and “Bacon” as things I like on my Redditgifts’ profile.) 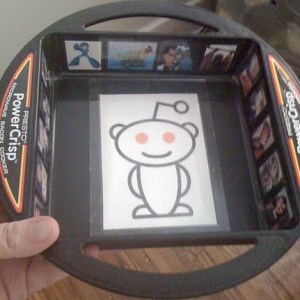 Since launching in late 2009, over 42,000 people in 106 countries participated in Reddit gift exchanges. Those participants spent nearly $1.5 million on gifts, according to statistics recorded by Redditgifts.

Until recently, the gift exchange site was run exclusively by long-time Reddit users Dan McComas and Jessica Moreno. As part of the acquisition deal, both will join the Reddit staff to work on the site full-time — with McComas becoming the Reddit gift exchange project manager and Moreno assuming the role of community manager.

“It became clear that what had started as a fun project had mutated from a fun nights & weekends project into a demanding 24/7 project. [The] 2011 Secret Santa is on pace to potentially have (over) 30,000 participants, and there’s no way Dan & Jessica could continue to run Redditgifts.com as a volunteer project,” Martin wrote in a recent blog post. “We wanted to see Redditgifts grow, and we wanted Dan & Jessica to be able to invest even more time and energy into making Redditgifts even better. So, we figured out a way to bring them inside the Reddit family proper.”

For now, the two sites will remain separate. If the company does decide to merge Reddit accounts with Redditgifts accounts, users will be given a chance to opt-in, according to Martin.

Because Reddit has dedicated premium advertisement spots and written official blog posts in the past, it’s easy to understand why the acquisition of Redditgifts is a natural fit for the company. The gift exchange site also fits in nicely with the company’s revenue strategy, which centers around non-traditional advertising/promotion that doesn’t distract or anger its passionate community. Thus far, that strategy is working. In June, Reddit members were responsible for bringing in over 1.2 billion monthly page views.

“If all this new relationship does is provide a way where [Dan and Jessica] can keep Redditgifts the way it is now and continue growing it, it’s totally worth it,” Martin said. “For some people, Redditgifts is the first introduction to Reddit. So, this is such a great way to make a first impression.”