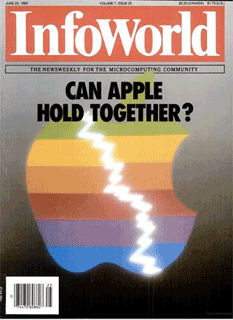 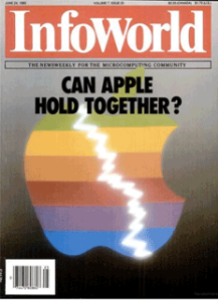 Everyone’s talking about Steve Jobs resigning as CEO at Apple (just like they did in 1985, image at left) but a few publications are doing it in unique ways. Here are my top 10 favorite resignation stories.

10. “No, Jobs would never be called Steve Jock,” writes Patrick Dorsey at ESPN. “But the now-former Apple CEO impacted athletics in many, many ways.” Dorsey goes on to list them in this article “Steve Jobs had a major impact on the sports world.”

9. Want to talk to your friends about the future of Apple leadership without sounding like an idiot? Read the article “After Steve Jobs’ resignation, 5 top executives at Apple” from the Economic Times. It’s short and sweet and gives a “who’s who” of executives you will be hearing about now that Jobs stepping down.

8. Lot’s of news sites are speculating about Jobs’ health. Elizabeth Landau at CNN writes about this topic well in “Piecing together details of Jobs’ health history.”

7. Dave Caolo at TUAW.com has this interesting post: “Steve Jobs has 313 patents to his name, including some unexpected.”

6. “The moment Apple’s biggest fan met Steve Jobs” on The Next Web is a big, warm, fuzzy story that will make you want to get a haircut.

4. This story really is number 1, but since it’s my story I’m going to act like it isn’t (it is) and stick it in here at number 4: “Why Apple employees avoid getting in the elevator with Steve Jobs”

3. TheGadgets.net does a great breakdown of Jobs’ top inventions with pictures in the post “Top Inventions of Steve Jobs.” If you don’t have a whole lot of time to read, this story is a fun skimmer.

2. “Steve Jobs steps down the first time: The 1985 press coverage” from Technologizer.com is a good roundup of what major news outlets reported that year. Some of it is being repeated now, almost verbatim. I nabbed the InfoWorld image used in this post from them. It’s fantastic.

1. If this list isn’t enough, KQED has 14 more stories to checkout.