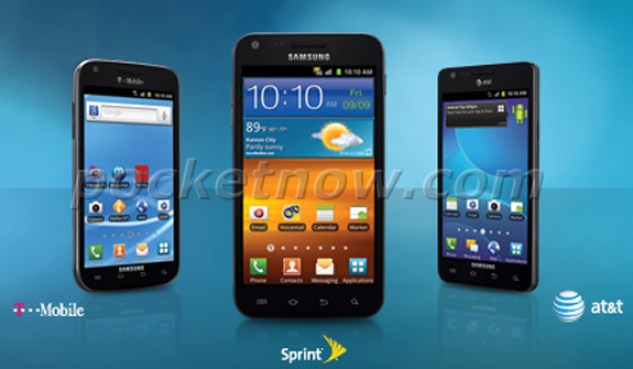 You won’t have to wait until next week to catch a glimpse at Samsung’s US bound Galaxy S II phones.

The above image was leaked today by the mobile site Pocketnow, which gives us our first semi-official look at what Samsung has up its sleeves with the US Galaxy S II devices. Samsung initially planned to announce the phones at a New York City event next Monday, but due to expected fallout from Hurricane Irene, the event is now taking place on Tuesday, August 30.

Noticeably absent is Verizon’s entry. As we reported earlier this week, Verizon opted out of offering a Galaxy S II device at launch, but it has a similar Samsung device planned for some time later this year. It could potentially end up being an LTE 4G equipped Galaxy S II, which Samsung is reportedly working on, according to Pocketnow. It certainly makes sense for Verizon to wait for an LTE version, since most of the carriers high-profile phones support 4G.

Judging from the picture, it doesn’t appear that much has changed with the Galaxy S II with during its journey from Asia and Europe.

The Galaxy S II is currently the king of the hill when it comes to high-end Android phones. The phone sports a 4.3-inch Super AMOLED screen (though the resolution is lower than the iPhone 4 and some 4-inch competitors), a Samsung dual-core processor, and support for near-field communications (NFC). The latter feature, available only in certain models, makes it primed to take advantage of mobile-payment services like Google Wallet.

Check back in with VentureBeat on August 30 as we’ll have plenty of coverage from Samsung’s Galaxy S II unveiling.