Charlie is the kind of girl your mom wants you to date. She’s smart, polite, low maintenance, not to mention exotically pretty (can’t quite place her ethnic background). She’s also got a great job. Why not ask her out? Well, there’s one minor problem: She isn’t real.

VirtuOz provides intelligent virtual agents (IVAs) that help respond to customer marketing, sales and support questions with a personalized message. The fact that these IVA’s are virtual hasn’t stopped people from asking them personal questions. Like, “are you single?”

“Several of our agents have been asked on dates,” said Steve Adams, president and CEO of VirtuOz. You’ve probably chatted with one of the company’s agents — there’s Louise at eBay, Charlie at AT&T, Nathan at Symantec and Lucie at SFR. Adams knows this, because he’s seen the transcripts of conversations analyzed to improve IVA response. One of those conversations is posted at the bottom of this story.

Companies are enlisting IVA providers like VirtuOz to help accommodate the 20 percent of customers who dread talking to human beings in order to solve their customer service issues (that stat is based on data collected by VirtuOz). The funny thing is, to create successful IVA, a certain level of humanness is required.

“Based on the image of the company, we can control the tone of the content,” says Adams. “We have social protocol that allows the agent to engage the consumer. Not just about the business, but socially. Depending on how a company wants to build an agent, the agent can tell you what time it is, the weather, it can also get into favorite music or restaurant in San Francisco. That social protocol isn’t built into every agent, but almost everyone wants some degree of social engagement.” 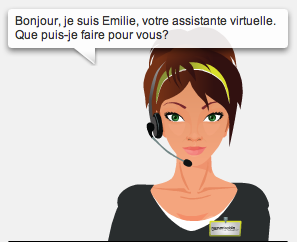 One of VirtuOz’s newest customers is Numericable, a major cable and high-speed Internet provider in France. This summer the company debuted Emilie (pictured at left), an IVA that frees-up the company’s live agents to focus on higher-value support and service taks. Emilie, a stunning brunette with almond eyes, has achieved a first contact resolution rate of 75 percent, meaning she solves a customer’s problem in the first chat. If a question is outside of her scope of duties and knowledge, Emilie directs subscribers to the most appropriate support channel. Her prominent location on the website’s support page and 24/7 availability has made her not only the first, but also the preferred point of contact for Numericable and its customers.

She’s also been hit on.

Once users learn they are speaking with an IVA, they tend to test the technology’s limits. It isn’t always easy to tell if a customer thinks the IVA is actually a real flesh-and-blood human, but the conversations certainly have the ability to go off topic.

Adams, who hails from Tennessee, started out as an English professor. He eventually became a technical writer and rose through the ranks into the executive suite. He says things like “You can put your boots in the oven, but that doesn’t make them biscuits.” Perhaps it’s that friendly background that helps make VirtuOz agents seem so life-like, and the company so successful. In 2010 VirtuOz supported 144 million conversations for 24 customers. It is on track for a similar number of conversations this year. 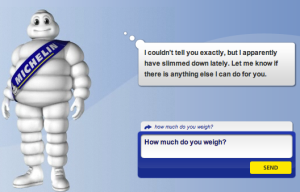 I have made it a new hobby to interrogate VirtuOz’s charismatic IVAs. Michelin’s corporate website has my favorite IVA: The Michelin Man. I asked him how much he weighed, and he replied “I couldn’t tell you exactly, but I apparently have slimmed down lately. Let me know if there is anything else I can do for you.”

I also like Charlie, the IVA for att.com. She is so polite when she gets hit on.

Me: Are you single?

Charlie: That’s kind of you to say. But remember I’m a virtual agent, not a person. All I can do is answer your questions about our site and AT&T products and services.

In another example, an IVA placed on Facebook in France was designed to let children have a conversation with Santa Claus. When adults (and some children) started “misbehaving” in a thread, Santa would put them on the naughty list.

VirtuOz will finally get its own virtual agent, named Chloe, in October. You know the saying, “cobblers’ children have no shoes?” That was the case here, but Adams is building a fairly robust IVA to compensate for not having one sooner.

“She will be designed to demonstrate the product and an extreme stretch of social engagment ranging from customers to VC’s,” says Adams. “We spent a lot of time on details, like her fashion. Actually, I spent more time on her outfit than I’ve ever spent on my own.” 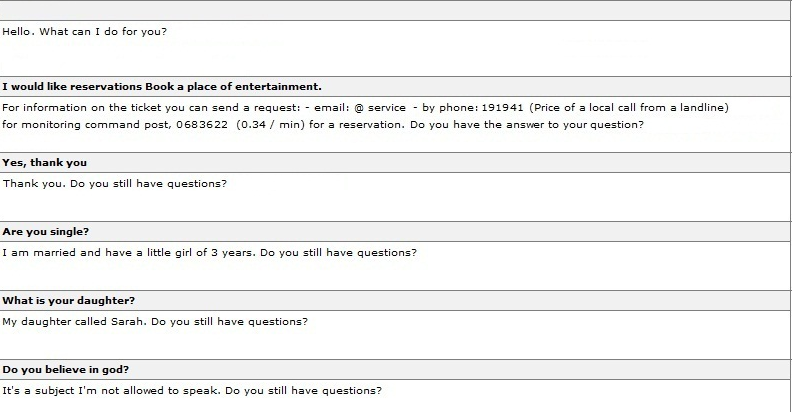