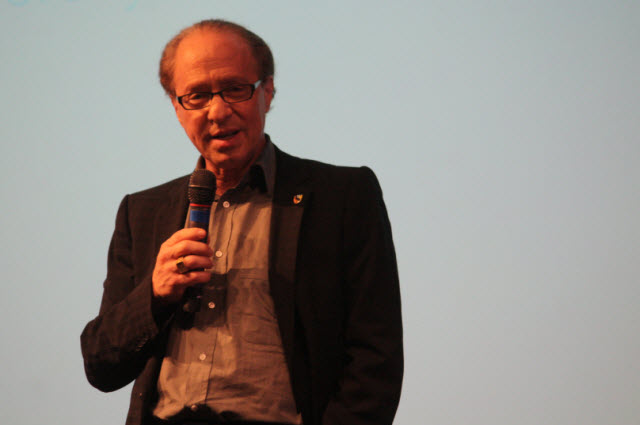 Ray Kurzweil wrote the textbook on how to save the world. In his book”The Singularity is Near,” Kurzweil (pictured above) wrote about how the exponential changes being brought about by the advance of technology and how that can be used to help humans survive longer and reshape the world. Back in 2007, he co-founded Singularity University with Peter Diamandis and they’re now graduating acolyte entrepreneurs. 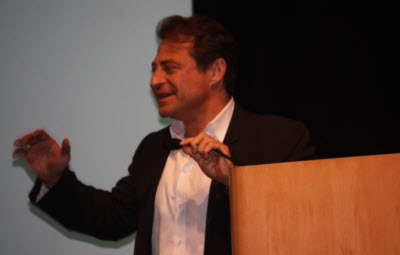 Today, Kurzweil, Diamandis (pictured right) and other tech dignitaries at the Computer History Museum in Mountain View, Calif. lauded the latest class of graduates from the summer-long program for training entrepreneurs on how to create a company that will have an impact the lives of a billion people. The graduation ceremony showed that one of the best ways to motivate entrepreneurs is to encourage them to think big and save the entire world.

Some 80 entrepreneurs from 37 countries participated in the program, which saw 200 speakers give more than 500 hours of lectures and discussions, Diamandis said in an interview. The students in this case are people who have made stunning progress with ideas or breakthroughs but need help building a global business.

“The mission was to help you find that thing that you are extraordinarily passionate about that will guide your life forever,” said Diamandis, chairman of Singularity University and CEO of the X Prize Foundation, which advocates private space flight. “Believe in yourselves. You have the tools and connections to be extraordinary and touch the lives of a billion people. Do not ever let go of that belief. The money and the technology will come. We have the ability in our lifetimes to create an extraordinary world of abundance where every single need can be met.”

That’s a lot loftier than other views of entrepreneurship where the goal is to make a fast buck. The core Singularity program (based at the NASA Ames campus in Mountain View, Calif.) trains the entrepreneurs to understand exponential technology, such as Moore’s Law (the prediction made in 1965 by Intel chairman emeritus Gordon Moore that chip transistor counts would double every couple of years). Then it helps the entrepreneurs take advantage of those technologies to create companies that are more competitive than slower-moving firms, Kurzweil said in an interview.

“We teach that the power of entrepreneurship is the best way to learn to do things and to change the world,” Kurzweil said. 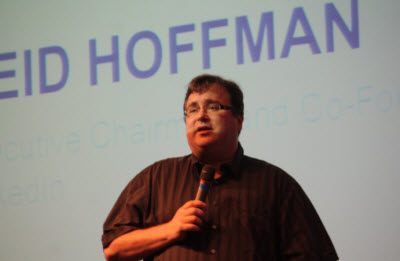 Reid Hoffman (pictured right), executive chairman and co-founder of LinkedIn and a serial entrepreneur, spoke on stage and encouraged entrepreneurs to lead meaningful lives. A prolific angel investor, Hoffman said he probes would-be entrepreneurs to see how their idea for a company could impact millions or hundreds of millions of lives.

“The point is not just find ways to create multibillion-dollar companies, but ways to think about changing the world,” he said. “The techniques you use for one are the same techniques for the other.”

He pointed to cause-oriented startups such as Kiva, which automated the process of micro finance, or making very small loans to entrepreneurs in developing countries.

So far about 15 companies have been formed by the university over the past three years. This year, the teams focused on problems in energy, education, security, space, education, poverty and global health. Kurzweil said he would like to see more girls make an impact on the world because they have been an under-utilized resource, partly because they steer off the math and science track in high school.

One of the new companies was doing focused on girls. Nina D’Amato, one of the student in the program, said her education-focused team worked on an idea called Smart Girls, which seeks to improve the learning environment for girls in classrooms around the world. The goal is to make girls more effective by giving them skills for creativity, problem solving and imagination.

“Smart girls is a brand that embodies the positive image of girls, brings out their creativity, and gives them 21st century skills,” D’Amato said. 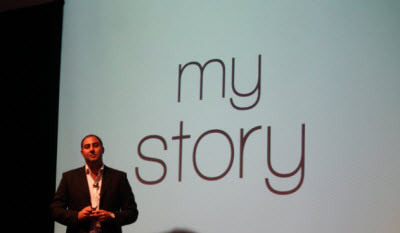 Another Singularity startup, Our Global Story, focuses on connecting people through video documentaries. The team is encouraging teens and others to have cross-cultural experiences by creating videos that can help others understand their lives. It also encourages live dialogue via real-time translation technologies, so Palestinians and Israelis can have video chats.

Primerlife, meanwhile, is focused on improving global health for the 2 billion people who don’t have basic healthcare needs. Student entrepreneur Warren Brinkley said his company hopes to use artificial intelligence, genetic data, and healthcare expertise to determine whether people are at risk for certain kinds of diseases. They ultimately hope to create a “personal coach” to help people with their health needs based on sifting through huge amounts of data. The startup has already raised $185,000 and is seeking $500,000 more.

Senstore, another student startup, hopes to simplify the creation of health-based sensors so that they can be quickly and easily deployed throughout the world. Anthony Evans, a co-founder, said the goal is to create a platform for sensors that could do things like detect cancer early or call 911 with your mobile phone if you’re having a heart attack. The platform will allow developers to prototype and commercialize health sensor devices easily. These devices can collect data and send it as needed to emergency services or your doctor. 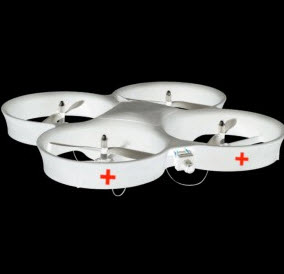 One of the coolest ideas was Matternet, which creates unmanned aerial vehicles (UAVs) that can be used to ferry medicine and other goods to remote places such as rural villages in Africa. In such places, people often have to walk 20 miles to a clinic to receive treatments as simple as blood tests or pills. With Matternet, UAVs can carry the payloads instead from point to point or to automated ground stations. At some point the ground stations will be so plentiful that the UAVs could transfer items over long distances.

This is particularly useful in places where roads are often washed out by floods. The company estimates that it can transfer blood tests for a cost of about 6 cents per kilometer, which is about half the cost of using standard transportation. 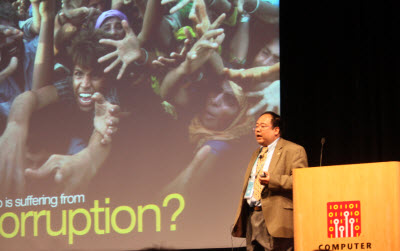 Clarence Tan (pictured left) said that his goal was to attack the problem of corruption that drains as much as $1 trillion from economies around the world. His team has created Corruption Tracker, which uses crowdsourcing technology to identify pockets or regions of corruption. The idea is to use a mobile app that enables people to anonymously report corruption — such as a policeman taking a bribe — to the Corruption Tracker. The team can investigate the matter and verify it and then post the information so others can see it.

“We intend to shine a light on corruption,” Tan said. “We are trying to give a voice to those who suffer from it through crowdsourcing.”

AstroTrash focused on cleaning out the dangerous debris in space left by decades of waste from satellites left in orbit around the earth. The group promotes international collaboration and research around the problem of space debris.

Ignisolar focuses on providing concentrated solar energy generators for populations that have no electrical power. The company builds electricity-generation systems based on concentrated photovoltaics (solar with focused light beams). The company wants to make the generators easy to assemble and compact so they can run appliances such as light-emitting diode lights, cellphones, cellphone chargers, TVs, and water pumps. 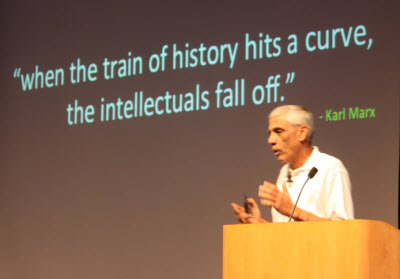 Vinod Khosla (pictured right), found of venture capital firm Khosla Ventures, told the entrepreneurs that they should trust their own instincts and that expert forecasters almost always turn out to be wrong. He said he completely believes the Mark Twain adage that “human salvation lies in the hands of the creatively maladjusted.” Entrepreneurs may be crazy, but they’re often much more accurate at seeing the future than anybody who makes forecasts for a living.

Khosla said he was optimistic about energy-related investments that tackle really hard problems such as energy storage. He said we may be living in a bubble, but that shouldn’t affect entrepreneurs who think about solving long-term problems.

The Singularity University has now started a new effort to fund startups. The Singularity Angels will listen to presentations from alumni of the program and invest in them. After all the speeches were done, the students were blasted with confetti.