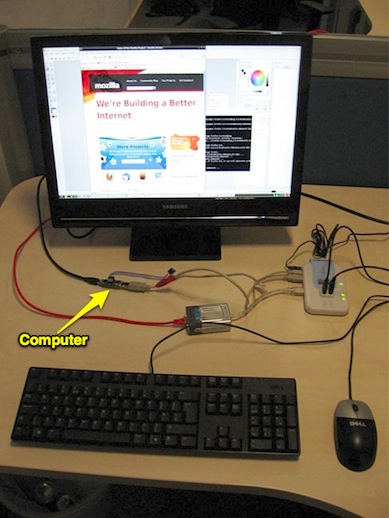 Remember that $25 computer about the size of a flash drive game developer David Braben unveiled in May? According to a video posted on Saturday, it can run games in high-definition, too.

The Raspberry Pi computer is a single-board computer that’s capable of rendering video games like Quake 3 at a 1920-by-1080 pixel monitor resolution. The game cruises along at around 20 frames per second with the lighting and geometrical details cranked up to maximum quality. It’s also running at a 1920-by-1080 pixel resolution, which brought the frame rate down slightly, Raspberry Pi foundation’s Eben Upton said. Considering the limited horsepower on the Pi, it’s still pretty impressive.

The computer has a 700-megahertz ARM processor and 128 megabytes of RAM. That’s about half as much memory as most smartphones today, which also sport processors that usually clock in at around 1 gigahertz. That makes it slightly weaker than a smartphone. There’s an SD card slot on the device that handles any storage, and it can output video and other images at 1080p resolution. It has a USB-out port that lets owners plug in a keyboard, and an HDMI-out port that can connect to an HDMI-enabled television or monitor.

(It’s also tiny — you can see it just under the monitor in the picture above.)

The Quake 3 version running is an open-sourced version of the game compiled for the Pi’s Linux build. The Pi sports a version of Linux, an open-sourced operating system that has become increasingly popular in philanthropic causes like this because it’s free to install and distribute. Braben said earlier he hopes the computer will be available to the public sometime later this year.

You can check out a full video of the demo below.