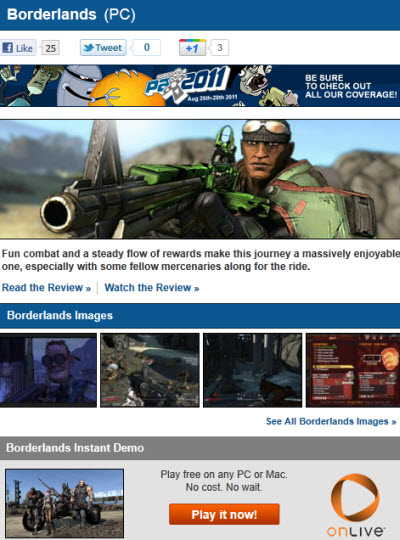 GameSpot is one of the largest game fan-news and review sites. This new feature will give its readers a real “try-before-you-buy” experience at the moment when they’re reading about a game. They can instantly access demos by clicking a link embedded in game reviews.  That’s better than going to the store or waiting several hours for a demo download.

As part of the deal, GameSpot video content and reviews will now be available on the OnLive platform.

OnLive delivers games that are streamed from servers directly to a user’s computer. Those games are computed on servers, but they play as quickly as games stored on the player’s own machine. OnLive offers a la carte, subscription or rental of streamed games on its own portal. But the service can also embed games on other websites through a web link. Partners like GameSpot embed the link in their own pages so it seems as if the game is being played directly on the GameSpot site.

“For as long as video games have existed, consumers have sought out information that helps them make smart purchases and get the most out of their gaming experience,” said Simon Whitcombe, vice president of games at CBS Interactive, which owns GameSpot.