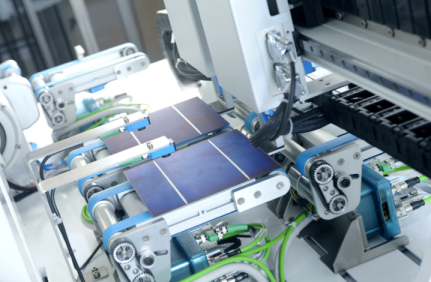 The Baccini Pegaso solar panel printer reduces overall manufacturing costs for solar panels screen printing — a part of the process of manufacturing a cell — by around 5 percent. But the machines can produce solar panels that capture more sunlight and convert it to electricity than typical photovoltaic solar panels, Applied Materials senior director of global product marketing Jim Cushing told VentureBeat. Improving solar panel efficiency ends up reducing the cost of generating a watt of electricity from solar power.

“If you look at our customers, they’ve spent the last two years doing two things: scaling by building a lot more factories and trying to lower the cost,” he said. “The scaling part is slowing down right now, they’re lowering the price right now, so the focus right now is how we get our efficiencies up.”

“There is significant overcapacity in solar,” he said. “Falling prices are good for making solar power more competitive with other sources, but we have the (average selling price) declines outpacing market growth — meaning industry revenues will actually dip short-term and remain flat through 2016.”

Most government incentives for solar power are available geared toward home owners and manufacturers that build solar panels for home rooftops. There’s a smaller surface area available for the panels, which typically need to face a certain direction. Efficiency is more important to take full advantage of solar power in that situation, Cushing said.

“From end customer demand all the way down there, there’s demand for higher-efficient solar panels, and that’s working its way all the way through the supply chain,” Cushing said. “Cell manufacturers are finally able to get a premium on their high-efficiency solar cells.”