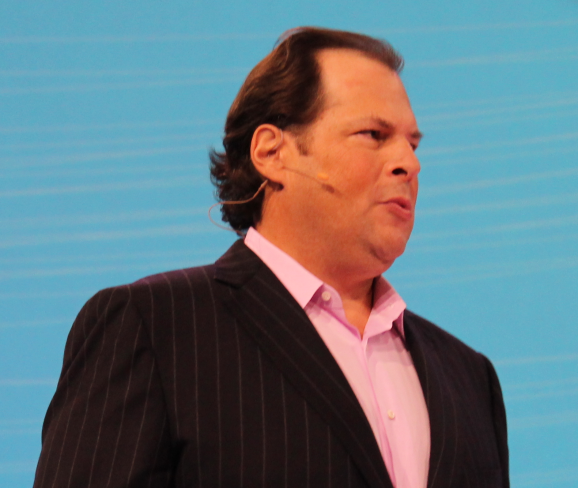 “HP threw their hat in the ring on PCs and said we’re out — why?” he said today at the Dreamforce 2011 conference in San Francisco, Calif. “It’s because smartphones and tablets are taking over. We recognize that incredible fact.”

HP recently decided to spin out its PC-building industry as the company began a massive restructuring effort. The company is one of the largest PC manufacturers in the world. The company also said it would stop building hardware for its mobile operating system, webOS, and focus more on enterprise technology. Benioff himself is the chief executive of a massive enterprise company that built a market cap of around $17 billion (compared to HP’s $53 billion market cap).

On top of the mobile revolution that brought a bevy of smartphones and tablet computers into the enterprise — which was courtesy of former iPhone manufacturer Apple chief executive Steve Jobs, Benioff said — is an impending social revolution. Benioff pointed to social networking giant Facebook as one of the main drivers of a new generation of the enterprise.

“We’ve seen (foreign dictators) Mubarak fall, Gadaffi fall — it won’t be long until we see the first corporate CEO fall for the same reason,” Benioff said. “For failing to listen to its customers and to listen to employees, just like Gadaffi and Mubarak.”

Salesforce.com today unveiled a whole slew of new features for its own enterprise social network, Chatter. It added real-time chat, screen-sharing and the ability to add members from other businesses to limited Chatter groups. It’s had to compete with other socially-charged enterprise companies like enterprise social network Yammer and cloud storage provider Box.net, which were all born carrying the ideas that Web 2.0 stars like Twitter and Facebook brought to the table just a few years ago.