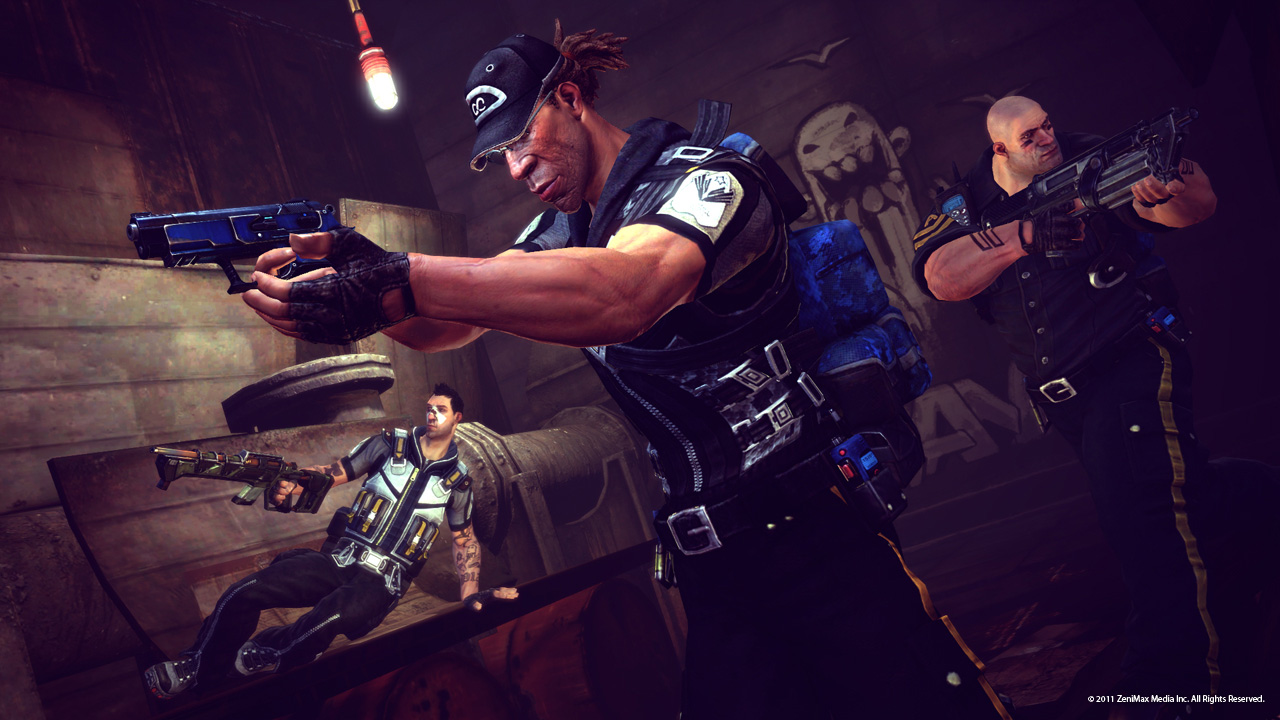 A few weeks ago, I got Brink in the mail from GameFly. Back when it was announced, I looked forward to. It combined a beautiful atmosphere, unusual character design (despite the game's universe having a strict "no women" policy) and light parkour-inspired climbing. It was sure to be a fun ride.

Whenever the game got close to shipping, reviews and impressions began to arise on websites and Twitter. The popular consensus was that Brink was a one-way street to MediocreVille.

I put it on my GameFly queue anyway. I had to give it a chance, even if it could be a one-night stand.

The day I got it, I didn't have time to sit down with it. I had to work early the next morning so I went to bed at a respectable hour. As I was getting ready to go upstairs, I heard the bing! of the Xbox 360 powering on. I looked over at my boyfriend, who was leaning over it.

"What are you doing?" I asked.

My boyfriend does this thing where he tests out games I get in the mail before I get to play them, and it nearly ruins my initial experience with them. He doesn't think it's a serious offense, but it is quite a large pet-peeve for me.

When I get a new game, especially one I'm really interested in, I play it a very specific way. I consider it a contextually layered approach.

I start with layer one, or what I'll refer to as "core gaming."

I wait until the sun goes does down so the living room is shrouded in darkness. I turn off the lights so less stuff in my apartment will catch my eye and draw my attention away. I sit on the floor a couple of feet in front of my 32" HDTV, much like a little kid watching cartoons. The close approach is two-pronged. Firstly, it allows the screen to fill my field of vision so I'm less likely to get distracted by outside influences. Secondly, it allows me to remove my glasses, and the glare they cause, as I play. I turn the volume up a little more than usual to become more immersed in the atmosphere and less likely to miss audio cues. On rare occasions, I put headphones on/in, but louder-than-usual speakers are generally enough for me. I don't have surround sound, but I definitely wouldn't mind it (if I could afford it). I also eschew the sweet-ass TRON controller I bought Patrick because the blue lights on it might distract me. The no-lights and no-TRON-controller rules go double for horror games because darkness is a must for those. I even play horror games that I've finished multiple times, such as Condemned: Criminal Origins and Silent Hill 2, in darkness. The final step (which I've only reserved for two games) is to turn Achievement notifications off. I can't have those popping up and interrupting my game.

This core-style gaming is how I approach almost every new game. I want to give all of my attention to it.

From there, depending on how invested I become with a game, I either step out to an exterior layer of gaming or I modify the core setup. If a game draws me in less over time, I'll allow more possibility for distractions. I'll play more during the day or leave the living room lights on.

I reach the outermost layer when I back up and sit on the couch, play during the day and leave a light on. I'll check my phone regularly and talk with Patrick during cutscenes in the exterior gaming layer. Shame on me?

When I eject myself to the exterior layer of gaming, however, it doesn't mean a game is bad. It's honestly just exhausting to sit in the dark and give a game every second of my attention. Some games just don't demand all of it during every session.

When Patrick began to play Brink, I shut the bedroom door upstairs to avoid any contact with it. Not seeing the game is not enough for me. I don't even want to hear it being played or I'm annoyed. Alas, up a flight of stairs and behind a closed door, I could still hear the machine guns firing back and forth.

"Those guns sound really great," I thought to myself. When I finally got my hands on Brink's guns two days later, it didn't surprise me that the sound design was a standout feature from the package. 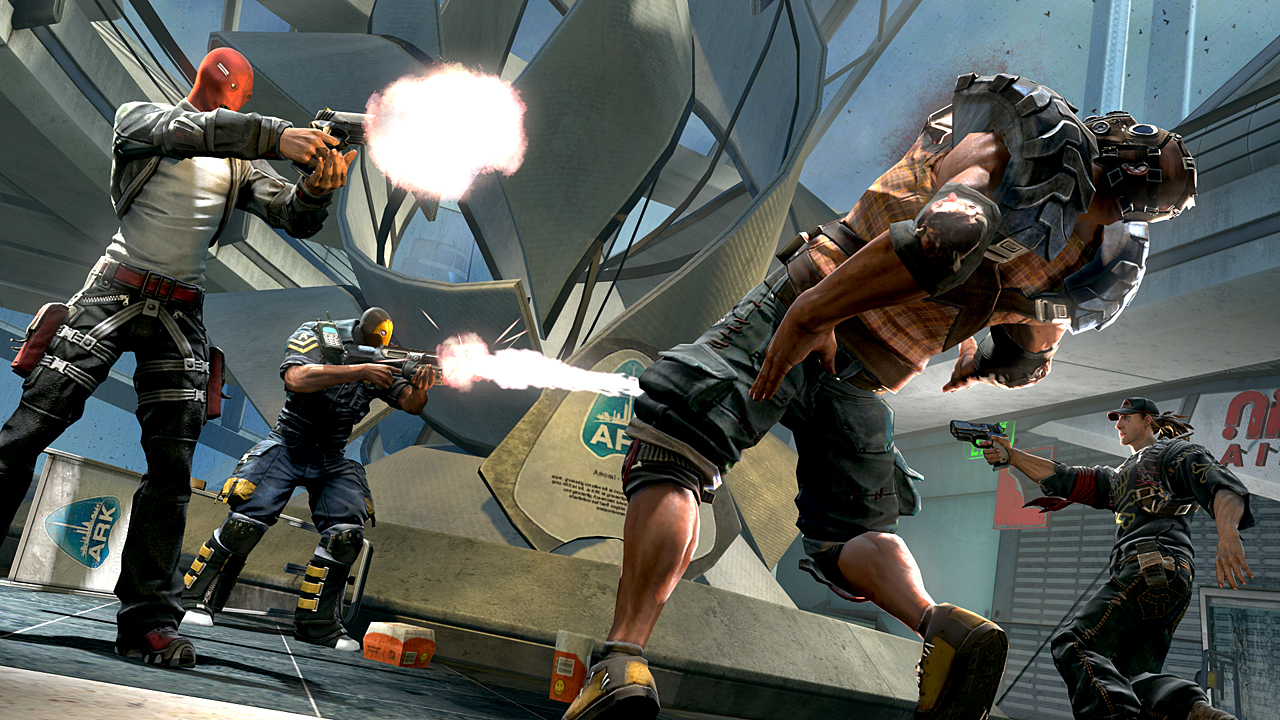 I ended up only playing Brink during a single sitting. I finished a handful of challenges and tried a "campaign" mission offline before giving up. It appeared that my opinion could easily fall in-line with that of the majority. Brink, from my hour or so, was highly mediocre and forgettable. Had I been playing with a load of people I knew, it might have been different.

From the get-go, I knew it probably wasn't going to win my heart, but I still gave it the core atmosphere it deserved when I first played it.

Last year, Patrick bought Assassin's Creed: Brotherhood, and I fully intended to play it on a separate save file as he did. It turns out, the game is so long that it took him a while to beat it, and he ended up playing it in front of me multiple times. This was a rare case where it worked in my favor because, just from watching him play, I lost interest in personally playing it, but I still paid enough attention to become engrossed in the story. And I'm  usually not someone who enjoys watching other people play games.

It happened again a few weeks ago when I got Red Faction: Armageddon in the mail. I started the game before Patrick, but he quickly caught up with me. After seeing him pass my progress, I began to notice how repetitive the game looked. To give Armageddon the benefit of the doubt, games certainly feel a lot less repetitive when you're actually playing them. This made no difference to me as I passively watched him play. Although it didn't totally hook me from the start, it had completely lost whatever magic it might have had after I watched him play it for a while. He beat it, and I never played beyond the part where he had originally passed my progress.

Whenever Vanquish came out, I reviewed it for Vox magazine, so it was imperative that nothing in the game get spoiled for me ahead of time. Naturally, this rule was constantly challenged by Patrick, who wanted to play Vanquish, too. He tried to sneak robot gunning action in whenever he could and pushed the limits when I was home.

One night when I got home from work, I entered the apartment and immediately noticed he was playing it.

"I'm going to go get the mail and by the time I get back, Vanquish better not be on the TV," I said.

I sauntered to the mailbox slower than usual to give him time to hit a checkpoint and stop the game. I waited outside the door and sifted through the envelopes to see what bills we'd gotten for a few extra seconds. When I walked in, he was still playing it.

This is where our accounts of the story split.

He insists I threw a bitch-fit and made him turn it off. I remember telling him that because I was reviewing the game, my immersion and analysis of it had to be on a different level than if I were casually playing it. I couldn't let anything sacrifice my objective immersion in the game, so I couldn't let anyone play it in front of me. He remained angry with me. We had a small fight over the scenario, though it only registered about a 2.0 on the first-world-problem scale.

Although I only reviewed a handful of games for Vox magazine, I can credit it with launching my layered approach to new games. Even if I know the game I'm about to play might not be my next Silent Hill 2 or Heavy Rain, I still try to objectively give each one the attention it deserves in the beginning. If the game fails to capture me, I'll just start playing it with the lights on. Or if it's really bad, I'll just sit around while my boyfriend plays it.