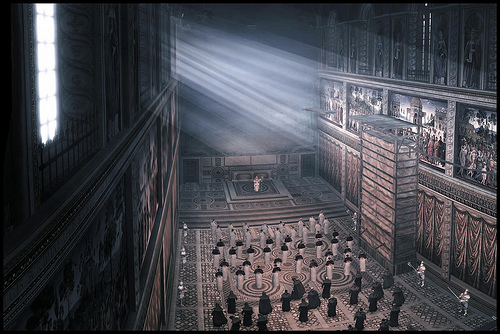 It's a shame I can't stop and appreciate the art.

I’ve stalked through the rafters and scaffolding of the unfinished Sistine Chapel as I sought the blood of the Pope. Borgia guards have given up pursuit of me as I parachuted off of the ruins of Il Colosseo. Against all odds, a mere cart of hay and straw kept me from being smashed to bone and pulp as I plummeted from the top of the Campanile di Giotto. Almost anticlimactically, mere pocket change bought me the deed to the Pantheon. Though the teachers and professors throughout my near two decades of education would balk at this statement, I’d confidently put forth the claim that I’ve learned just as much, if not more, about Renaissance Italy by playing Assassin’s Creed II andAssassin’s Creed: Brotherhood than I did in school. No other genre and no other series could have created such a fully-realized setting, and I doubt that it will be sooner rather than later before someone tries again. Ezio might be our avatar and our star, but Italia is our playground.

Any prospective player might be able to glean a fair idea as to how the Assassin’s Creed series might play simply based on the title alone. If you work through this game fighting off hordes of guards with an entire city full of screaming citizens fleeing your presence, you’re doing it wrong. These titles encourage stealth, guile and speed. You must choose your moments wisely without being too cautious – and when that moment comes you must strike like lightning. It might seem at odds that a game of strategically placed knives, arrows and shadows would have want or need of a lush setting, but it works. These games aren’t housed in the narrow corridors of an FPS or spread out over the impersonal world maps of an RTS. They’re more than that – they’re an open world sandbox lined with the pages of history. 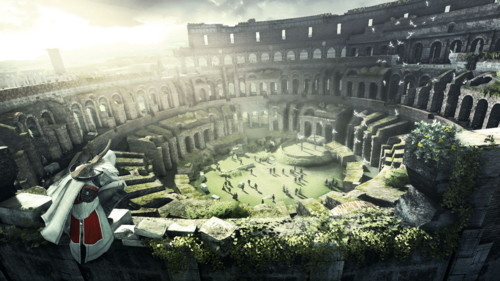 Can't do THAT in real life.

I would go so far as to say that no other series or genre is as perfectly suited as Assassin’s Creed to accomplish this sort of task – it’s literally built into the story. So many of the components that make up the setting fit right into the complicated narrative that Ubisoft weaves. Not only is the Animus a wonderful commentary on what role gaming plays in society, but it also gives these titles the perfect excuse to drop players in settings and times for hours on end. At its heart, the AC series revolves around MacGuffins – these so-called “Pieces of Eden” that have been sought out by many throughout history. They can’t be found by conventional means, so the genetic memories of the people most likely to know where they’re located are uploaded into the Animus, where their descendants sift through them minute by minute.

This means that the game could take place anywhere at any time. Due to the success of the character Ezio Auditore, Ubisoft seems content to explore the Renaissance era for at least one more game – the forthcoming Assassin’s Creed: Revelations. However, it’s not just narrative that contributes to the setting – gameplay itself does, as well. In some open world games, buildings and landscapes exist simply to be navigated around. In Assassin’s Creed, this is not the case. Exploration is encouraged. Is that the Senate Plaza? Climb all over it, little ants. Not sure what you’re scaling? Thankfully, when a new location is discovered, the Animus chimes in with the option of reading a database entry expanding upon the historical significance of that landmark. Aside from the main storyline missions, there are also side quests that further flesh out the setting. By the time I was done with the story and the various races and challenges that Brotherhood had to offer, I could climb to the top of the Coliseum in mere minutes. I knew the best way to get to the top of Castel Sant’Angelo without arousing suspicion from the guards. Rome was my sandbox. 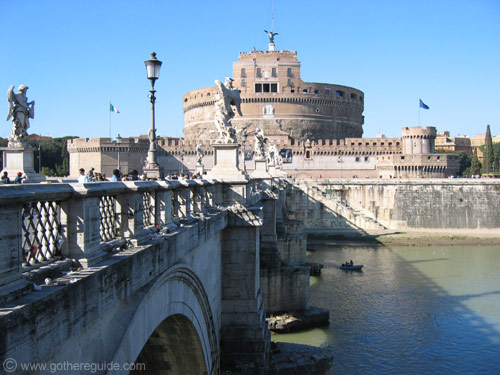 I don't understand…where are all the guards?!

Renaissance Italy was not by any means an unconquerable place for players to explore, but that doesn’t mean its breadth wasn’t impressively wide. Ubisoft could have made the mistake that some open world games make of stretching themselves thin by trying to cover too much ground. Oblivion, for example, had a lot of far-too-similar dungeons and digital acres of forest that just felt like the development equivalent of copying and pasting. Assassin’s Creed could have easily fallen into the same trap by trying to cover too much of Italy. On the other end of the spectrum, the cities they created could have been too large and confusing for players to navigate. Instead, they struck a healthy medium. In Assassin’s Creed II, there’s the countryside of Monteriggioni and the relatively urban Florence. In terms of coastal areas there’s the swampy Forli and the flooded avenues of Venice. Assassin’s Creed: Brotherhood is sometimes derided for covering only one city – Rome – but it, too, shows diversity of setting. There’s the elegant Vatican district, the urban Centro district and the rolling green hills of the Campagna. There is no lack of diversity in setting, nor is it too much to take in.

No other game could have pulled this off this realization of a vision, at least where a historical setting comes into play. Out of pure curiosity, I did some research as to what some of these landmarks looked like in reality. The colors of the Campanile di Giotto are practically spot on. The Castel Sant’Angelo looked so familiar that I felt like I could see the pits in the rock where I found purchase for my upward climb. Even the layout of the buildings or bridges surrounding these landmarks felt like places I had been.

More likely than not, I will never visit these places in my life. My escapades in a virtual world surely don’t hold a candle to the real thing, but I at least feel as though I understand the significance of these places. Should I ever get the chance to see them, though, I’ll be all the more prepared. After all, I’ve done things in and around these places that their architects probably never dreamed of. All I can say is this: Thank God for strategically placed piles of straw.