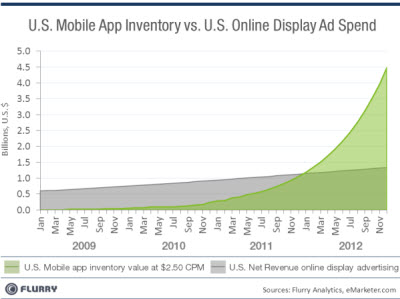 Mobile analytics firm Flurry said in a blog post this morning that the ad inventory of mobile apps — all of the space available for ads within apps on iPhone and Android devices — is growing so fast that it will soon be able to absorb all of the online ad spend for U.S. display ads on the web.

That is, the two-year-old market will soon meet the demands of a 15-year-old mature market in online web ads, said Charles Newark-French at Flurry.

The assessment is consistent with projections about mobile ad growth. Gartner estimated that mobile ad revenue would double to $3.3 billion in 2011 on a worldwide basis. eMarketer estimates U.S. mobile ad spending will top $1.1 billion this year. 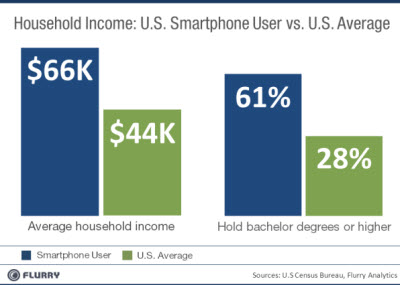 To calculate these numbers, Flurry tracked the average number of ads shown per session a user has with a mobile app. That number is 4.3, and the session time is 4.2 minutes. The average session length for a web ad is under 1 minute. Flurry tracks about 20 percent of all sessions in the market. Then Flurry compared the inventory available on mobile apps with the net ad spending on display ads in the U.S. online web market. That amount is just over $12 billion per year. Assuming that the CPM (cost per 1,000 impressions) is $2.50, Flurry came up with its numbers shown in the top chart. The figures show that mobile app inventory value will rise from $300 million in January 2011 to $1 billion by December 2011.

The reason the ad market is growing so fast is that over a million devices are being activated daily. The Apple App Store now has more than 400,000 apps and the Android Market has more than 200,000. Users are spending more time in mobile app sessions per day than they do on the web. And more publishers are integrating ads into their apps. 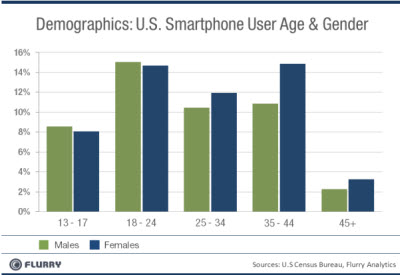 Flurry says the average smartphone user has 65 apps per device. And the average user is better educated and earns a higher household income than that of the U.S. average. Smartphone app users also cluster into younger age groups and trend slightly more female. Overall, Flurry said it has taken a lot less time for advertisers to embrace ads in mobile apps compared to the original display ads for the web.