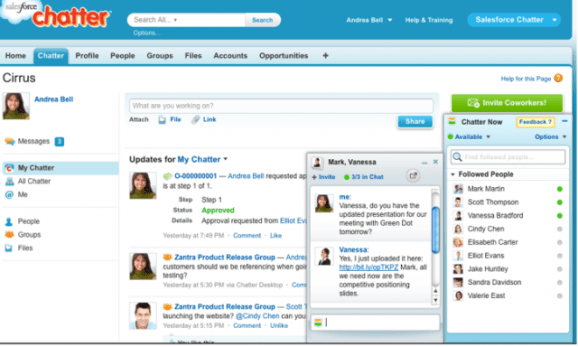 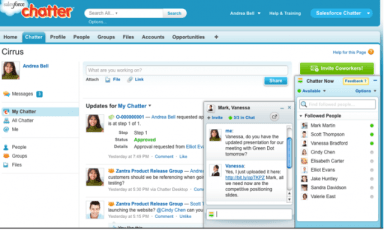 Chatter Now is similar to Facebook’s own chat application. It lets members of a business’ social network on Chatter quickly open up a chat without having to leave the main site or a web browser. Chatter users can also invite Chatter users from separate organizations into limited groups to collaborate on projects without diving any deeper into a company’s social network. Chatter users can also share their screen with other Chatter members through Chatter Now. The new mobile version of Chatter also lets companies invite their customers to Chatter networks to view files and see what is going on in the Chatter news feeds.

“You see this becoming the new user interface of Salesforce.com — it’s always relevant and you can always filter and adapt,” Salesforce.com senior vice president of marketing  Kraig Sensrud said. “You don’t have to fumble around and wonder what app to use, because everyone is already on Salesforce.com.”

The company launched the new features at its annual Dreamforce conference today in San Francisco, Calif. The conference attracted more than 10,000 Salesforce.com users and financial analysts.

The company initially launched its Chatter micro-blogging service to make a splash in the collaboration space. The service quickly picked up around 60,000 customers. Salesforce.com’s biggest customer, Dell, has around 100,000 active users. The rest of its paying clients have around 5,000 active users. That’s compared to Yammer, which has 3 million verified corporate users. Around 80 percent of the largest companies in the world on the Fortune 500 list have deployed the enterprise social network.

“We think that social is definitely a huge wave in the enterprise, we think that every enterprise software vendor is gonna be reacting to it,” Yammer chief executive David Sacks told VentureBeat. “Every company is gonna want to creates a feed of what’s happening inside their app — Salesforce is a little bit ahead of the curve, but all of them are gonna be doing it.”