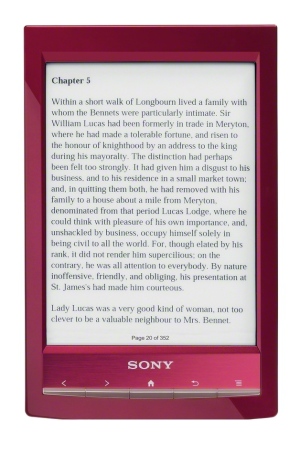 Sony on Wednesday launched a new version of its e-book reading device called the Reader Wi-Fi, which is the first e-reader to offer wireless public library borrowing. The device will retail for $149 and be available in October.

The e-book reader market is becoming increasingly crowded, and if Sony wants to compete it has to “wow” with new features and a low price point. The Reader Wi-Fi is going up against dedicated e-readers such as the Amazon Kindle, hybrid e-reader/tablets such as the Barnes & Noble Nook, and full-featured tablets that support e-book apps, most notably the Apple iPad, Motorola Xoom and Samsung Galaxy Tab 10.1. In addition, Amazon is reportedly on the verge of releasing its own iPad-like tablet competitor, on which reading e-books will be a big feature.

At the very least, this release might help the company keep up. Its new Reader Wi-Fi has a 6-inch multitouch E-Ink screen with 600 x 800 resolution and pinch-to-zoom abilities. It weighs 5.9 ounces and is 8.9mm thin. There’s 1.3GB of internal storage for books plus a microSD slot that’s compatible with memory cards up to 32GB. Based on a half-hour reading time per day, the Reader can stay on for three weeks with Wi-Fi enabled on a single charge. With Wi-Fi disabled, the device can last up to the month on a single charge.

One feature that Sony included to set the Reader Wi-Fi apart from others is the ability to easily check out public library books in ePub format. Sony claims its the first e-reader to do so. We’re a little suspect about how good the book selection will be, but we do commend Sony for at least trying.

The Sony Reader Wi-Fi will cost $149 and should land on U.S. shelves in October, 2011. It will come in three colors–red, black and white.