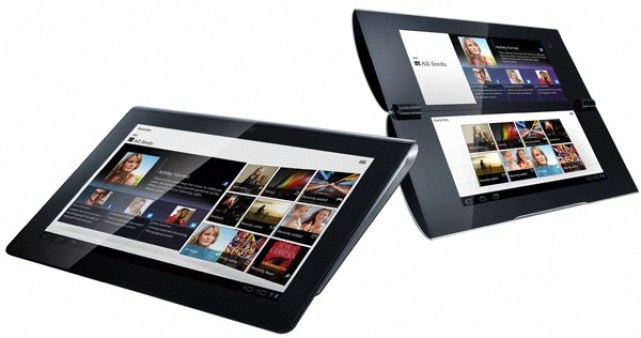 Say hello to the S and P, the forthcoming Sony Android tablets formerly known as the S1 and S2. Sony unveiled the new names for its Android tablets, along with European launch date details, today at its IFA 2011 press event in Berlin. The tablets are expected to be available later this fall.

By all appearances, nothing else about the tablets has changed — except for perhaps the diminished excitement surrounding them. When Sony previously announced the devices in April, they were dubbed the S1 and S2, so today’s announcement doesn’t give us much new information to get excited about.

The S is Sony’s 9.4-inch direct iPad competitor, which features a slightly curved design that resembles a rolled back magazine, and supposedly will make it easier to hold with one hand. It will come in 16 gigabyte and 32 gigabyte sizes, run a dual-core Tegra 2 CPU and will be compatible with AT&T’s 4G (we’re assuming HSPA+, not LTE) network. The P is a clamshell tablet, sporting two 5-inch screens, that resembles Nintendo’s DS portable console. Both tablets run Android and are tied into Sony’s Qriocity streaming music and movie service.

While it’s obvious that Sony is trying to stand out from the packed crowd of Android competitors, the company will need much more than unique designs to stand a chance against the iPad 2. We first caught wind of Sony’s unique tablet designs back in February, but now they just seem less interesting since ultra-thin tablets like the iPad 2 and Galaxy Tab 10.1 are available.