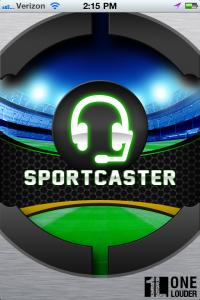 Football, the season for pigskins, tailgates and letters painted on stomachs, is among us  OneLouder, the maker of Tweetcaster, is gearing up for game time with a new free mobile app launched today. It’s called Sportcaster and isn’t based on stats from ESPN or commentary from John Madden. Instead, it’s based on Twitter’s API. Using a custom built back-end engine, the app pulls tweets from coaches, players, dedicated sports media and others to give fans up to the minute action happening on the field.

“You’re way behind if you’re not looking at [information] on twitter. Twitter is breaking news,” Evan Conway, president of OneLouder, told VentureBeat in an interview.

Twitter is realtime. It’s 140 characters, there’s no fluff, and it’s what’s happening now. Sportcaster, which is now available on Android devices and the iPhone, taps into Twitter’s application programming interface (API). You can choose to see streams based on a particular game. Narrow the coverage further by specifying a particular team, or whether you want updates from coaches, players or media only.

“If you want a score or a game recap, that’s kind of yesterday’s app,” said Conway. Despite this, Sportcaster does allow you check schedules and scores that are aggregated through licensed content.

What’s great for sports fans is you don’t need a Twitter account to reap the benefits of quick, brash and entertaining play-by-plays. Conway noted 95 percent of the population knows of Twitter, but only 13 percent use it, a stat he found here. According to him, a good majority of these people not using Twitter are sports fans. The app doesn’t discriminate if you’re not a Tweeter.

The sports space is a dense one, however, with big wigs like ESPN, network sports programing and Twackle by Sports Illustrated, which have their own apps in the App Store. Conway even admitted saying, “Everyone is an indirect competitor.”

But not everyone taps into the collective knowledge of people on the ground. Sure, reporters are on the field, getting interviews, but tweets originating from the horse’s mouth are uncensored, unedited and probably make for an interesting retweet, if you choose to connect your Twitter to the app. It also lets player watch for tweets specifically associated with Fantasy Football to help them decide on trades and who to 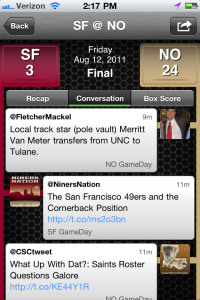 bench before the weekly deadline arrives.

So the app is cool. But with Twitter sloughing off third party apps, is OneLouder concerned with life in the Twitter API ecosystem?

“I’d be more concerned about Tweetcaster than I would about [Sportcaster],” he said. Tweetcaster is OneLouder’s iPhone app competing directly with Twitter’s.

“Sportcaster, in my opinion, does exactly what Twitter wants developers to do. Twitter came out and said 5 different ways they want devs to use their API and one of them is to aggregate their streaming content in interesting ways.”

Conway sees his app as a combination of technology, art and filtration that play into Twitter’s strengths. In fact, he suspects that Sportcaster will attract people to sign up for Twitter. He even sees Twitter’s user base growing from 13 percent  of the population aware of Twitter to 25 percent or more and says, “If they cut that off, that will be the beginning of the end.” But he also accepts that the ecosystem is the way it is.

“I don’t believe [Twitter] has been evil doing this,” he explained, “They’ve been a bit clumsy, kind of knocking devs over along the way, but as long as they open their API’s and let us compete, then that’s just kind of the nature of the beast.”

In the future, Conway plans to expand Sportcaster into new sports verticals, such as basketball and further fleshing out their college sports offerings. A Sportcaster iPad app is also in the works.