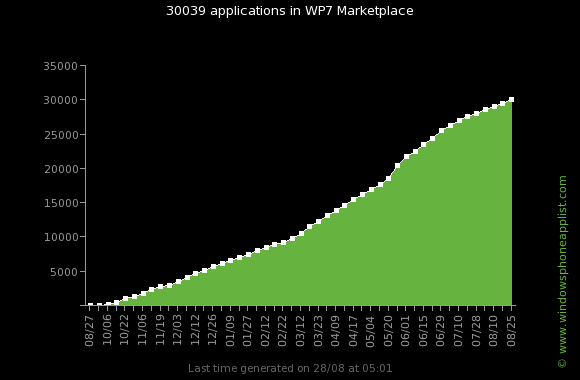 Though it still has nothing on the Apple or Google mobile app stores, Microsoft’s Windows Phone Marketplace now has more than 30,000 applications available for the Windows Phone 7 platform, according to Windows Phone App List.

Microsoft has struggled to make a dent in the app market share against Google’s Android and Apple’s iOS operating systems, but at least it’s putting on a good face when it comes to releasing a large selection of applications. The Windows Phone Marketplace had 25,000 apps on July 2, so app additions are moving at fast clip.

Apple’s App Store now has more than 500,000 apps while the Google Android Market has more than 200,000 apps. The 30,000 measurement may not sound like much compared to those numbers, but it’s more impressive when you consider the Windows Phone platform is less than a year old. Microsoft is trying to spur development by paying higher profile companies to make Windows Phone apps, as well as coaxing webOS developers to move to the Windows Phone platform since HP decided to stop manufacturing webOS devices.

With the upcoming Windows Phone Mango update, Microsoft is hoping it can once again put its platform in the spotlight and attract new consumers to its products. New Mango phones are due out soon from the likes of HTC and Nokia, and we expect these powerful devices will show off what Windows Phone can really do.