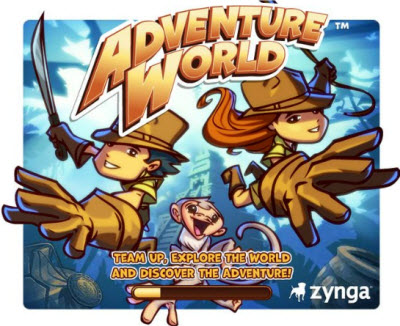 Zynga‘s Adventure World launch, coming in the next few weeks, is a big test for the social game publisher. If the Indiana Jones-style title takes off, Zynga will have a much better chance of pulling off its initial public offering, which has been stalled because of the gyrations of the stock market.

That puts pressure on Zynga to outperform with Adventure World, an original title that hopes to break new ground on Facebook in a genre that is popular on other game platforms. Zynga’s most recent game, Empires & Allies, saw strong growth at its outset but has settled at around 42 million users, well below Zynga’s top game, CityVille. Overall, Zynga has 276 million users on Facebook, down from its peak. To make its IPO a no-brainer, Zynga could really use another big hit.

Adventure World comes at an important time for Zynga in another respect. After ruling Facebook for a couple of years, Zynga finally faces resurgent competition. Electronic Arts, for instance, has the fastest-growing game on Facebook now with The Sims Social (more than 23 million monthly active users), and rival Wooga (more than 36 million users) of Germany has seen a rapid rise this year. Zynga, of course, has an advantage because it can cross-promote Adventure World to all of its existing gamers. 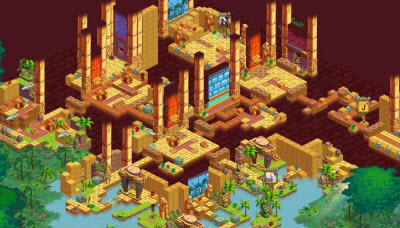 Adventure World is one of the byproducts of Zynga’s acquisition strategy, which has yielded a new acquisition deal every month for more than a year. The seeds of the game started at Zynga Boston, which Zynga acquired when it bought Conduit Labs a year ago. After the acquisition, Zynga shuttered Conduit’s social music game and bankrolled Adventure World, which was just a concept at the time, said Nabeel Hyatt, general manager of  Zynga Boston and former CEO of Conduit Labs, in an interview.

“This is a big bold bet,” Hyatt said. “We call it a social adventure game.”

Zynga Boston is a sizable studio, but it’s just a small part of Zynga’s sprawling development studios that now include more than 2,500 people. Jesse Kurlancheek, principal game designer, formerly worked at Turbine on massively multiplayer online games such as Lord of the Rings Online. He’s an example of the traditional game developer who has moved over to work on Zynga’s titles in the hopes of reaching a much larger market on Facebook.

“It’s a funny happenstance for me to go from long story arcs of the hardcore MMOs to a very similar style of game play and story development for a much wider audience,” Kurlancheek said in an interview. “This is about an evolution in social games,” where social games become more complex but still retain features that make them broadly appealing to casual gamers.

Adventure World is set in the “golden age of exploration,” with inspiration from all sorts of adventure fiction, Hyatt said, from Indiana Jones to Lara Croft and Zelda. But it is rendered in Zynga’s distinctive cartoon style, and it is aimed at appealing to the large female demographic on Facebook in addition to hardcore social gamers. Players search for the lost city of gold, El Dorado, solving puzzles and finding hidden objects in the terrain. Zynga says the feature-rich game is the largest it has ever offered in a first release. 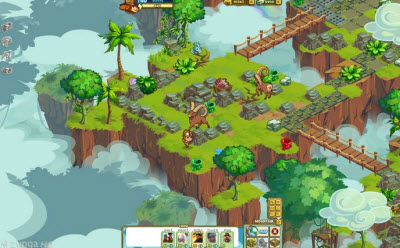 The game starts as players fly to a base camp in Central America, joining an Adventure Society in the quest for El Dorado. The game has five worlds: Deep Jungle, Mountain, Cavern, Volcano and El Dorado, with more than 30 dynamic environments that include clouds, hostile Rams and snakes. You can walk into traps that sap your character of energy, and much of the maps remain undiscovered, covered in fog, until you traverse them.

The game is more than 40 times bigger than past Zynga games, and it has more than 1,000 distinct art assets (such as four kinds of spiders). There are often multiple ways to get around obstacles, either directly through combat or indirectly by sneaking around them.

“You can get through most of the game without combat,” said Kurlancheek.

That, of course, makes no sense to a hardcore gamer like me. But it’s more appealing to the larger universe of players who aren’t into hacking and slashing. As with Zynga’s FrontierVille, the game lets the player fight snakes. But the violence is relatively mild and you can kill cute little things like bunnies. You can attack things that are creepy and crawly, but there isn’t much really scary stuff.

The game can be played socially, as players can enlist their friends to join them (asynchronously, or not in simultaneous game play) on quests. You can add as many as 12 Facebook friends to your crew as you tackle the missions. The game will be available in eight languages: English, French, Italian, German, Spanish, Turkish, Norwegian and Portuguese. 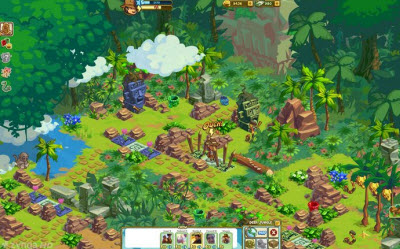 Players start by customizing a 3D avatar, or virtual character, and then they stockpile a bunch of adventure tools and gadgets like machetes, pickaxes, whips, dynamite and grappling hooks. Players can choose from more than 10,000 avatar variations. There are 200 quests and 25,000 objects across 30 maps. The game uses a Flash game engine developed from scratch by Zynga Boston. That signals a pretty big investment, since many game companies reuse the game engines they’ve developed for prior hits.