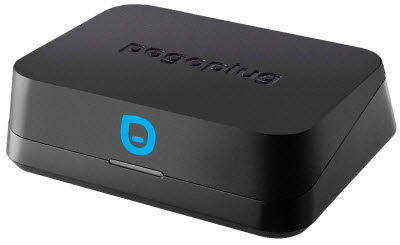 The product is a mobile version of the San Francisco-based company’s multimedia streaming device for the home, the Pogoplug, which chief executive Daniel Putterman described as a “personal cloud” device. Putterman calls this new device a “mobile cloud companion.” The device recognizes the fact that mobile storage is still too expensive and can’t keep up with the demand for storage of personal media.

This kind of device will make mobile devices more capable in comparison to computers. That may prompt more people to believe that mobile devices aren’t such a big trade-off compared to tethered devices such as PCs.

It frees devices from storage limits by allowing users to stream libraries of photos, music and movies from their homes to their mobile devices. It also allows them to share unlimited amounts of photos, videos, and other content from mobile devices with friends and family. It does so instantly and privately, the company says. Users can access their data from anywhere in the world. You can share files on social networks such as Facebook or Twitter.

You install the software on a computer or use a Pogoplug device, and you select files that you will want to access remotely. You can then log in from a computer or mobile device and store an unlimted amount of data. You can share a single file with a single person or share the whole collection with friends.

Pogoplug Mobile will be available in October for $79. The company is taking preorders at its web site.

Back in December, Cloud Engines raised $15 million from Softbank Capital and Morgan Stanley, and it also raised $9.25 million in two earlier rounds that were financed by investor Foundry Group. The company was founded in 2007 and has 50 employees. It has strategic partnerships with Seagate, Sony and Buffalo. Rivals include Amazon’s Cloud Drive.