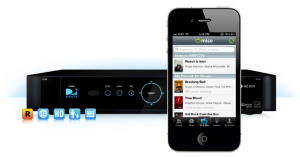 TV and movie watching social network Miso just made it easier for DirecTV customers to share their viewing habits with friends.

The company announced a partnership with DirecTV Thursday that will allow its users to easily find and share what they’re watching via a DirecTV set-top box when checking in from the Miso iPhone app.

“We thought the cable and MSO (satellites) were the most natural paths because that’s where most people are watching TV”, Miso CEO Somrat Niyogi told VentureBeat. “This is a big step for us, but we have more to come for users.”

Miso’s service, which has about 200,000 users to date, works by allowing people to check-in, rate, comment, earn badges and complete quizzes while watching things on television. Right now, users have to search from a list of programs to find what they’re currently watching.

The new DirecTV integration, however, lets Miso users see the exact show they’re watching so they will no longer have to manually search from a list of programs — provided that the iPhone is connected to the same wi-fi network as the set-top box. The new functionality is available as of today.

One of the first questions I asked Niyogi, who I initially interviewed over a year ago, had to do with when Miso would add functionality that allowed its users to automate the check-in process when watching television — especially while viewing on streaming services like Netflix and Hulu.

“We haven’t gone that [automated check-in] route because we all have our guilty pleasures (Jersey Shore?) that we don’t want anyone to know we watch. Some people want that to remain private,” he told me.

But, that doesn’t mean the company won’t explore automated features in the future, he added.

Niyogi said the company plans to roll out support in the future for additional content service providers (like Comcast, AT&T Uverse and Dish Network) as well as many popular set-top boxes (such as Boxee, Roku and Apple TV).

For those of you who don’t have DirecTV service, we’ve embedded a demo video of Miso’s set-top box integration below.