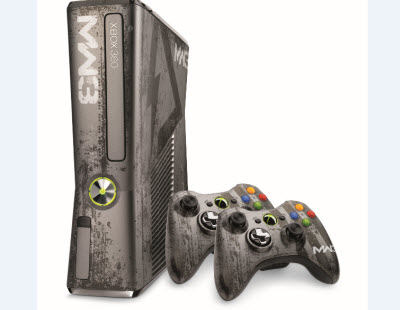 Microsoft is releasing a limited edition Xbox 360 for Call of Duty: Modern Warfare 3 when the game debuts November 8.

The new version of the game console will come with cool features for Call of Duty fans. Microsoft regularly offers such consoles for the die-hard fanatics of game series such as Call of Duty, as it’s a great way to squeeze more money out of a fan base that will happily pay more for custom goods.

The “collectible” Call of Duty bundle comes with a specially decorated Xbox 360 console, two custom wireless controllers, a 320-gigabyte hard drive, a copy of Call of Duty: Modern Warfare 3 and custom power-up sound when the console is turned on. A one-month subscription to Xbox Live Gold is also included. You can add items to your virtual character, or Xbox Live avatar, that show you have the Call of Duty bundle. The console will launch November 8 in the U.S. and will sell for $399.

Separately, Microsoft is shipping a Modern Warfare 3 wireless headset with Bluetooth functionality for $69.99. The company is also selling a related wireless game controller for $59.99. Both will be available October 11.