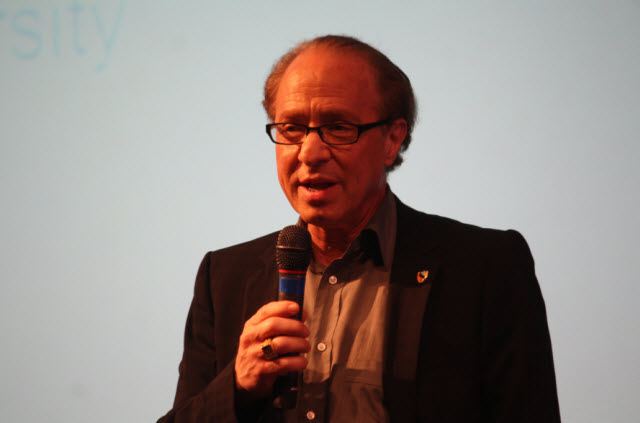 Futurist Ray Kurzweil believes that health and medicine are going to benefit in the next two decades from what he calls the law of accelerating returns. That idea comes from Kurzweil’s 2005 book “The Singularity is Near,” and it reflects his optimism about how “exponential technologies” will come together to deliver a world where we can solve all of our problems. We’ve got an exclusive video interview on what Kurzweil thinks about those ideas now and how he is recruiting entrepreneurs to make his vision happen.

In fact, one consequence of the Singularity, or the augmenting of humans with technology, will be that we’ll live forever because we’ve solved health and medicine problems via nanotechnology and biotech. Kurzweil anticipates we could start extending our lives indefinitely (supposing we don’t get hit by a bus) within a couple of decades. We caught up with Kurzweil for a video interview last week during the closing graduation ceremony for the third class of Singularity University, which Kurzweil co-founder with Peter Diamandis in 2007. The program trains 80 entrepreneurs from dozens of countries over the course of a summer and tasks them with creating a business that can impact the lives of a billion people.

The Singularity is a term coined by Vernor Vinge, a computer scientist and science fiction writer. He used it 1993 to describe the point at which rapidly accelerating technology makes the future literally impossible to predict. The technological singularity has been most closely associated with the development of artificial intelligence, and the point at which AI is powerful enough that machines can improve themselves.

I heard Kurzweil talk in 2008 about this topic at the Game Developers Conference. He speculated back then that human lifespans would start stretching longer and that we would start becoming immortal at some point as nanotechnology and biological research advances make it possible to repair our bodies as they age. It sounds like a crazy prediction, but Kurzweil has a good track record on predicting the outcome of exponential technologies. In the 1980s, he predicted something like the World Wide Web of the 1990s.

“The power of exponential growth means multiplying by 1,000 in 10 years and a million in 20 years,” he said in our interview. “Life-saving technologies like cell phones are in almost everyone’s hands, 5 billion of them. About 30 percent of Africans have them.”

On Friday, Kurzweil said that entrepreneurs from the Singularity University program are embarking on ventures that can change life for a billion people.

“The tools required to change the world are in our hands,” Kurzweil said. “It doesn’t require billions of dollars.”

Beyond health and medicine, Kurzweil wants to end evils such as poverty through new technologies.

“We can end the digital divide and the have-have-not society,” he said. “And we can do it ourselves.”

Kurzweil argued that the idea of massive change through entrepreneurship is not so far-fetched, considering, Kurzweil said, that a kid at Harvard who wanted to meet girls created the world’s biggest social network, Facebook.

“We want to bring entrepreneurship to even younger people,” Kurzweil said.

Here’s our interview with Kurzweil.

And here’s Kurzweil’s talk to the graduating class of Singularity University.