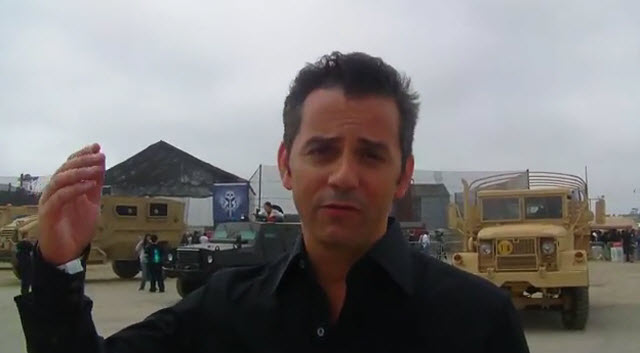 Eric Hirshberg, the president and chief executive of Activision Publishing ( a division of Activision Blizzard), is treating 6,000 Call of Duty fans to a celebration of the game series at a huge aircraft hangar in Los Angeles.

At the Call of Duty XP event, Hirshberg’s team announced new multiplayer features for the upcoming Call of Duty Modern Warfare 3 game and its accompanying social network, Call of Duty Elite, which will cost $49.99 a year. The aim of the XP event is to get a loyal fan base excited about the game so that word spreads about it so it can have as spectacular a launch as Call of Duty Black Ops, which debuted last November and became the best-selling video game of all time.

“This weekend is all about giving back to our fans,” Hirsberg said in our video interview. The event closes tonight with a Kanye West concert.

Hirshberg says there are four tenets that make every Call of Duty Game unique. The first is Epic Realism, striking a balance between real world authenticity “where this could be happening” with those “unbelievable, epic, blockbuster action, watercooler moments.” It also delivers the “ultimate adrenaline rush.” It’s a white-knuckle experience that shakes you up, he said. Third, the game is “easy to play, hard to master.” It has to be fun for anyone to play 60 seconds after they pick up the controller, but it also has to reward mastery.

The last is running the game at 60 frames per second. That’s faster than the 30 frames per second game that Electronic Arts is coming up with, Battlefield 3, which may make the game more physically accurate and prettier as a trade-off for the slower speed. Hirshberg explained that it’s all about “prioritizing processing power” to give the game a smooth and immersive feeling.”

“We’ve always prioritized 60 frames per second,” he said. “This is the secret sauce.”

Here’s our video interview with Hirshberg.