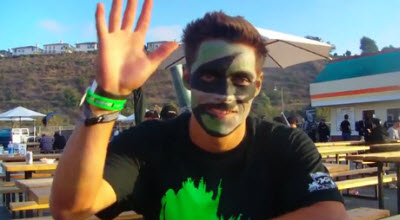 The fans that showed up at the Call of Duty XP in Los Angeles are a pretty dedicated lot. Many flew to the event from around the world and paid $150 to get on the 6,000 tickets for the exclusive event where Activision Blizzard showed off the multiplayer version of of the upcoming Call of Duty Modern Warfare 3 video game.

These gamers are inclined to like anything Call of Duty, but the game has to live up to their high expectations or they’ll trash talk it as much as the next guy. As their reaction goes viral starting this weekend, it could make or break the game at launch.

Activision has built a huge playground for fans in the old aircraft hangar in Playa Vista where Howard Hughes built his Spruce Goose “flying boat” aircraft in 1947. The place was bathed in green Call of Duty light and it had hundreds of machines where players like Darin Verduzco, (pictured), could play Modern Warfare 3 multiplayer for the first time. The compound also had a paintball arena based on the Scrapyard multiplayer map from Modern Warfare 2, a giant zip line, a Jeep Wrangle test drive course, and a replica of the Burger Town fast-food joint from the Call of Duty games.

Here are the videos. If you’ve checked out the demo video for Modern Warfare 3 multiplayer, please offer your own comments and take our poll at the bottom.

First, we have Darin Verduzco (pictured)  from West Sacramento. He got his face painted at the Mountain Dew bunker at the event. His gamertag is “I play to annoy you” and he likes to play with a riot shield. Verduzco entertained himself this morning by doing a round of sumo wrestling.

Next, we have Dan and Cameron from Orange County, Calif., below.  Dave took off a day from work and Cameron, who had just arrived, shut down his business early to get to the event.

And here’s Brian Denton from Phoenix below. He likes playing a sniper, and the multiplayer changes in the “confirmed kill” mode of the game had a big impact on his playing style. In the past, Denton could snipe for a distance and get some high scores in multiplayer. But in the “confirmed kill” version of multiplayer, you have to run over the body of the player you shoot to “confirm” a kill, picking up the player’s dog tags. Now, Denton has to snipe at enemies and let his fellow team pick up the dog tags. But he likes all of the new sniper guns, which are fast but not too fast, and all of the new perks you can earn through combat deeds. He says the game is fluid and feels like Modern Warfare 2.

“The game is much more balanced than it was,” he said.

And please take our poll.