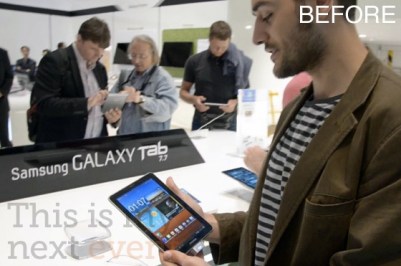 It looks like Apple’s preliminary injunction against Samsung’s Galaxy Tab 10.1 tablet in Germany has come back to haunt the Korean manufacturer, as it has apparently been forced to remove all references to its new Galaxy Tab 7.7 tablet from the IFA show floor in Berlin, reports FOSS Patents.

While the tablet was on display yesterday, it was labeled with a “Not for sale in Germany” sticker, which was a reference to Apple’s injunction. Samsung likely hoped that sticker was enough to show off the tablet at IFA, since it will be available in other European countries. Clearly, it wasn’t enough.

Samsung has also removed all mention of the Galaxy Tab 7.7 from its German website.

The company hasn’t yet clarified why it’s making this last-ditch effort to remove all trace of the Galaxy Tab 7.7, but the implication is clear. A German Samsung representative said that she couldn’t speak about ongoing legal matters when asked if Apple had anything to do with the device’s removal.

FOSS Patent’s Florian Mueller notes that there are two possible reasons for the tablet’s removal: Either Apple obtained a new preliminary injunction against it, or Apple complained to the German court that granted its initial preliminary injunction, arguing that the Galaxy Tab 7.7 closely resembled the Tab 10.1.

The gadget blog This is My Next posted before and after pictures of Samsung’s booth, which you can see here.

Samsung said earlier this week that it has no plans to bring the Tab 7.7 and its Galaxy Note to the US.

I suspect we’ll learn the full facts behind this case within the next few days. For now, it seems like yet another win for Apple against its ongoing battle with Android makers.

Photos via This is My Next 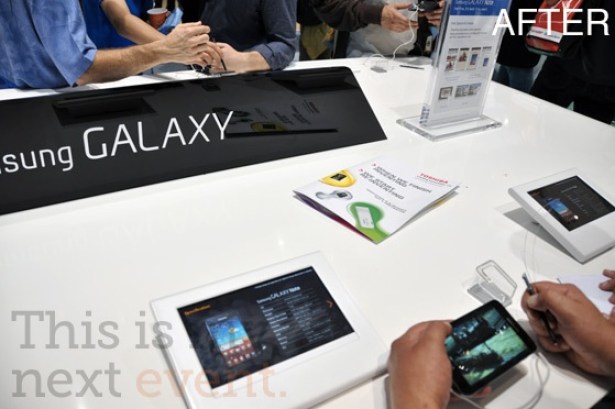