Apple will finally surpass Nokia in smartphone shipment volumes this year, shipping nearly twice as many iPhones as it did last year, according to a report by Digitimes Research.

Apple is expected to ship 86.4 million iPhones this year, up 82 percent from 2010. Nokia’s smartphone shipments, meanwhile, will fall to 74.4 million units this year from over 100 million last year.

The news is a reminder of just how far Nokia has fallen from grace, and how much influence Apple holds by being the only manufacturer of the iPhone. While the combined number of Android phones shipping is still larger than the number of iPhones, the fact that Apple is set to become the world’s single largest smartphone manufacturer is notable. 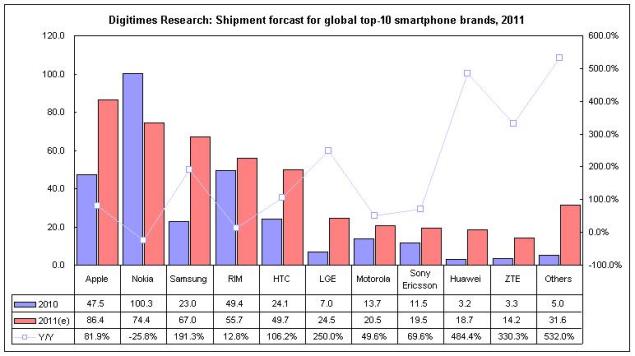