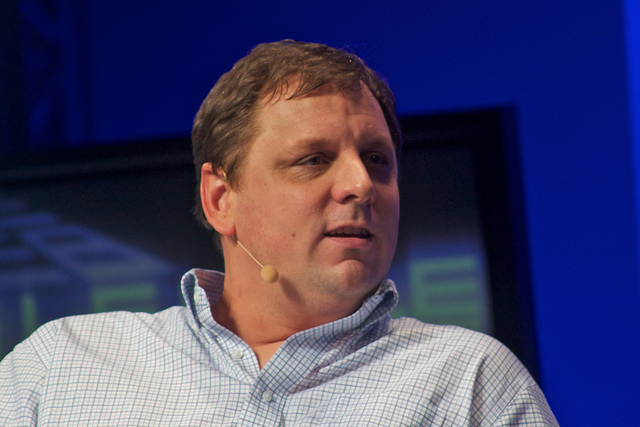 TechCrunch founder Mike Arrington struck a furious note today in favor of what he called “editorial independence,” but failed to answer the real question about how cozy TechCrunch is with his own investments.

However, he did put a price on that coziness: $30 million, more or less.

In his brief post, Arrington demanded “autonomy from Huffington Post, unfettered editorial independence and a blanket right to editorial self determination.”

In other words, he wants TechCrunch to be free from Arianna Huffington’s meddling.

While I respect and envy what Arrington has built, I think he’s being disingenuous in casting this as a Huffington-Arrington battle.

His response doesn’t answer his critics’ main charge: That there’s too much conflict of interest between Arrington the investor and Arrington the editor.

Ask yourself how much more value Arrington has as the head of CrunchFund (his new $20 million venture fund) if he manages to retain an editorial role within TechCrunch.

He knows it’s a lot. In fact, he values that relationship so much that he’s willing to buy TechCrunch back from AOL so that he can continue running and contributing to the publication while investing in whatever startups he pleases.

The price of that “independence” is about $30 million, or whatever it was that AOL paid to acquire TechCrunch. (The exact figure was never publicly disclosed.)

He wouldn’t make an offer like that unless he was pretty sure that the combined value of CrunchFund and an Arrington-led TechCrunch exceeded the repurchase price. Nobody (of Arrington’s means, anyway) would wager that much money simply to satisfy their ego, or to remain in control of a mere blog.

The fact is, it’s the linkage between TechCrunch and the CrunchFund that makes the latter so valuable. It’s why AOL CEO Tim Armstrong is so excited about the deal, even going so far as to say TechCrunch operates by different rules than other publications. It’s why a laundry list of other Valley VCs have also chipped in.

And it’s a patent conflict of interest that no amount of disclosures can mitigate. No matter how many times he or his writers mention Arrington’s and CrunchFund’s investments, those investments will cast a permanent pall of doubt over anything TechCrunch publishes.

Readers will (and should) ask of every story: Was this influenced by some other investment? Was there another story that TechCrunch didn’t publish, because it’s not a CrunchFund investment (or because the company didn’t kowtow to TechCrunch enough)? Is there some slight slant to this because of what the editors know or think they know about their company’s investment business?

And, the question I have long asked: How much of TechCrunch’s coverage is predicated on the fact that it is a tame industry publication, eager to heap praise on its friends while slinging derision only when the targets are safe?

It’s a question that won’t go away.

As Alexis Madrigal wrote in The Atlantic, “Arrington may be able to walk the ethical tightrope, but if he erodes journalism’s institutional ethics, he may do a lot more damage than promoting or ignoring a few tech startups would.”

And that’s why anyone who reads news sites like TechCrunch — or VentureBeat — should pay close attention. Keep asking those questions. The good guys will give you straight answers, not blustering shots in favor of some twisted version of “editorial independence.”