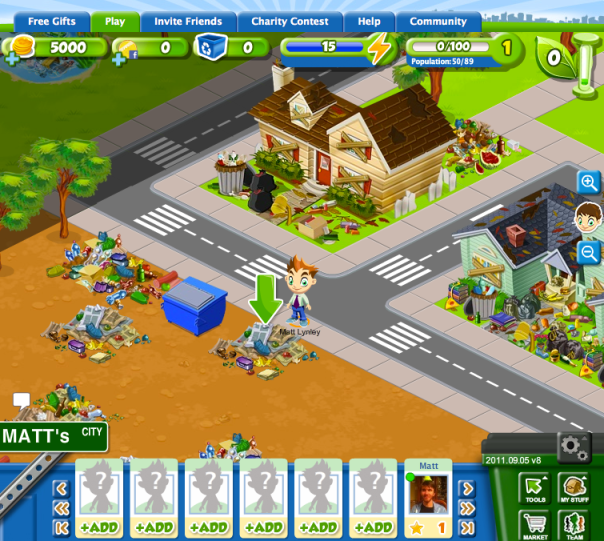 Instead of planting crops or building cities like in some of the most popular social games today — Zynga’s CityVille or Electronic Arts’ The Sims Social — in Trash Tycoon you clean up trash, build worm farms and try to convert what starts off as a mess into a vibrant “upcycling” community. The company is capitalizing on momentum built up in the social game space by companies like Zynga, which recently filed for an initial public offering to raise up to $1 billion.

“Trash Tycoon is our first game in the green space,” Guerillapps co-founder Raviv Turner told VentureBeat. “We want to try and motivate consumers to do the right thing.”

TerraCycle, a real-world recycling company that positions kiosks around major cities, is a sponsor for the game. Whenever a Trash Tycoon user recycles something through a TerraCycle kiosk, they earn points in the game that they can spend on virtual goods — similar to the way other social games give points for signing up for services.

Guerillapps plans to make other social games geared toward sustainability. It has an upcoming social game based on fitness and personal health that will interact in the real world much in the same way Trash Tycoon does, Turner said. 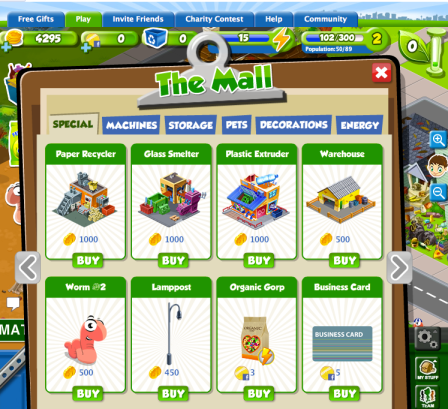 While Trash Tycoon is initially only available on Facebook, the company plans to port it over to other platforms such as mobile devices and Google+ soon, Turner said. The company is also planning to make an HTML5 version of the game, which is largely seen as a successor to the Flash technology that powers most modern web browser applications and works on most mobile phone browsers.

“Green is just the beginning,” he said. “We’re using a social gameplay model proven by those like Zynga and applying it to the market segment of health care and sustainability.”

The company has raised $500,000 so far, and it’s in the middle of raising another round of funding to start making its other games. But it has the benefit of positioning itself as both a gaming company and a cleantech company, Turner said.

“We get traction and interest from both traditional gaming investors and publishers and also investors interested in health and green,” he said. “It’s right at the border of combining gaming and sustainability.”

Guerillapps is based in New York, N.Y., and has six employees. It was founded in 2009, and Trash Tycoon has been in development for around eight months, Turner said. CarbonFund.org and TreeHugger.com are sponsors for the game. Guerillapps was a finalist at VentureBeat’s Who’s Got Game competition at our annual GamesBeat conference in San Francisco in July.