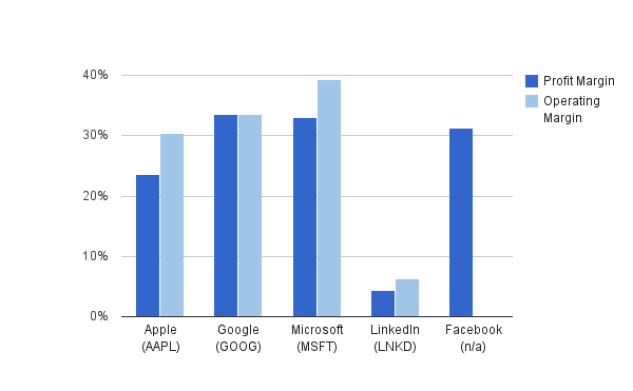 Granted, Reuters cited “anonymous sources,” meaning none of this is confirmed. But let’s take a look at the numbers and what they suggest if they are accurate.

Facebook doubled its revenue to $1.6 billion and its net income to $500 million in the first half of the year, according to the Reuters report. That translates to Facebook having an impressive 30 percent profit margin (the ratio of a company’s profit after taxes) — which is extremely significant given that market needs to determine how to value Facebook and its impending IPO.

For the sake of perspective, technology giants like Microsoft and Google have over 33 percent profit margins. Meanwhile, newly public company LinkedIn has a profit margin of 4.43 percent.

Check out the chart embedded above for a better visual representation of how Facebook compares to other companies in the tech sector.

But again, since Facebook is a private company that doesn’t disclose its financial results, the startup could just as easily see its growth slowing down.

“For a company as big and with as many connections as it does, Facebook could easily manipulate the news media into reporting positive news,” said Chief Executive Sam Hamadeh of PrivCo, a company that conducts extensive research on large private companies.

Hamadeh said its very possible that one of the higher-ups at Facebook — or perhaps even a high-profile investor — would agree to anonymously talk to credible news organizations about Facebook’s financials to take attention away from what’s really happening.

According to PrivCo’s report on Facebook, the company witnessed its first decline in May 2010 with drops in North America, the United Kingdom, and Norway. Its U.S. audience fell from 155.2 million to 149.4 million in May 2011. PrivCo’s analysis is obtained through a collection of market research firms, news and industry reports and insider information.

“Facebook’s revenue is heavily tied to participation. Once that drops, its revenue is going to decline,” Hamadeh said, adding that company’s currency transaction fees will eventually bring in much less revenue to retain its developer ecosystem and remain competitive with Google+. Right now, Facebook takes a 30 percent cut on all Facebook Credit transactions (which are mostly games) compared to just five percent on Google+.

All of these factors indicated that Facebook won’t be filing an IPO anytime soon, Hamadeh said.