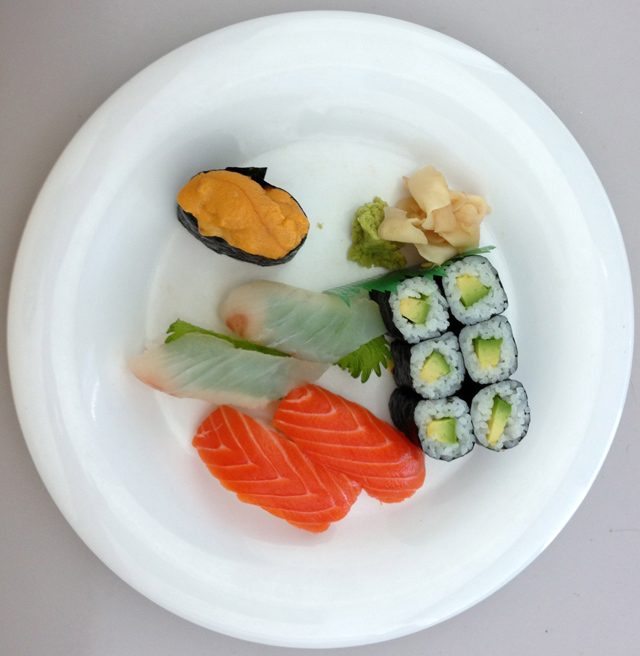 Yep, this is how far we’ve come. Now tech journalists are staring at a plate of unappetizing sushi trying to divine details about the iPhone 5.

The above photo, which was discovered by PocketNow and covered today by seemingly every publication running iPhone stories, was found on the Flickr account of Apple software engineer Anton D’Auria. And the evidence suggests it was taken by an 8-megapixel camera!

The EXIF data embedded in the photo indicates that it was taken with an iPhone 4. However, the data also says the original photo was taken at 3264×2448 pixel resolution (8 megapixels) and cropped to 2235×2291 (5 megapixels). The iPhone 4 takes up to 5-megapixel photos, while the iPhone 5 is reported to have an 8-megapixel cam. Plus, the photo’s GPS data says the shot came from Apple’s headquarters at 1 Infinite Loop in Cupertino, Calif.

Here are the problems: First, EXIF data can easily be changed and manipulated, so the photo could have been tampered with. Second, the Apple engineer’s Flickr account is now private so no one can verify separately that the data is authentic.

As much as we enjoy reading iPhone 5 rumor posts (and we certainly write our fair share too), this particular rumor might be a little much. Yes, the quality of the picture looks good and if it’s authentic, the camera on the iPhone 5 will be even better than the last. We’ve heard these rumors persistently for months. But, really, the photo could have been taken by an iPhone 4 or a point-and-shoot. There’s just no way to know. This is not even a seasoned reporter with an “inside source” or a report from “a factory.”

To my eyes, it’s simply a photo of mediocre-looking sushi.

Check back in the next few days for the next big iPhone rumor — that Apple is actually using the sushi in this photo as a new advanced input method!