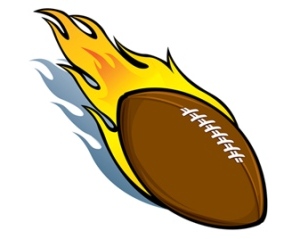 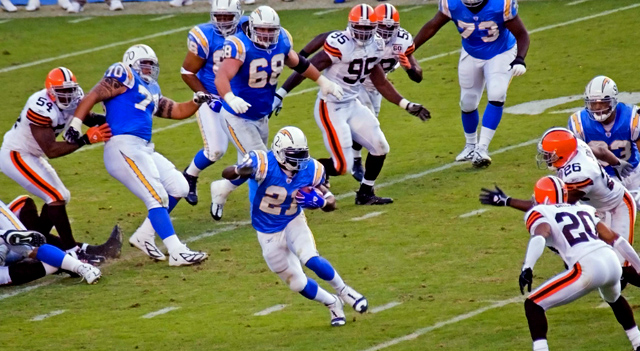 Football season starts tomorrow. And for those of us who aren’t 240-pound running backs, numberFire has new premium features to help you win the respect and admiration of your peers: By totally dominating your fantasy football league.

Founder and CEO Nik Bonaddio said that his year-old startup helped him do just that.

“I’ve always wanted to win when I play against my friends so I can be the alpha male of the group,” Bonaddio said. “Before numberFire, I wasn’t that good. With numberFire, I won convincingly last season.”

An estimated 20 million people play fantasy football each year, so it’s a smart field to mine. And this is an ideal week for adding new, powerful features, with the NFL’s first game of the season happening between the New Orleans Saints and the Green Bay Packers tomorrow.

“On a weekly basis, there’s 15 or more decisions you have to make on who you want to start or who you might want to trade,”  Bonaddio told VentureBeat. “It’s like being a real-life general manager. We help make people smart decisions.”

Launched in September 2010 with Bonaddio’s winnings from appearing on a TV game show, numberFire uses statistical reasoning and quantitative analysis to make the best possible predictions for fantasy football. Think of it as a Wall Street firm concerned about predicting player performance rather than stock performance.

“Sports are all about numbers,” Bonaddio said. “People know how many home runs Roger Maris hit, but they still use non-scientific and biased assumptions. People need to start applying math and logic to sports.”

Up until now, the site has been completely free and focused on generating users. But now that numberFire is in its second season, Bonaddio decided it was time to add paid features to generate better revenues.

“This season, I’m a little more concerned with making money, but it’s mostly about getting more users,” Bonaddio said. “That’s why the majority of the site is free. I want people to keep coming back.”

The three new premium level features include the following:

Bonaddio and his team of two employees have been working hard the last few months to get the new features ready to go. He said he regularly spends 16-hour days at the office.

“It’s not the most fun thing in the world, but it’s my baby, so I’ve got to be on it,” Bonaddio said. “It seems like I spend 99 percent of my time programming.” 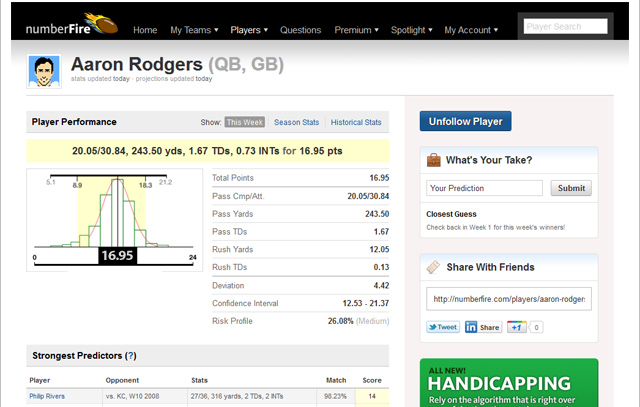 New York-based numberFire has been a member of the ER Accelerator venture capital fund since late June. The company is self-funded by Bonaddio, who got his seed money from an August 2009 appearance on “Who Wants to Be a Millionaire?”, where he won $100,000. Bonaddio likes to joke that Regis Philbin was his angel investor.

“When I won the money, I decided to sit on it for a couple months and not make any rash decisions,” Bonaddio said. “Fast forward a couple months and I was in the thick of the football season. Each season, I ran into the same problem with bad predictions. But then I realized I had the money to solve this problems, so I made numberFire.”

numberFire didn’t just prove his to friends that he had an edge. Using statistics, the service last year correctly predicted to its users that the Green Bay Packers would win the Super Bowl.

With that sort of accuracy, it can’t be hard to imagine a sports betting site or fantasy football service picking up numberFire. The service has already attracted media partnerships with SB Nation and Bleacher Report to give the sites statistical data and analysis.

Like many startup owners, Bonaddio said he would not mind if numberFire was acquired by another company. But he emphasized his goals are much deeper than simply selling his company. He said he wants to change sports generally, much like Billy Beane of Moneyball fame did by using “Sabermetrics” to change the game of baseball.

“In the era of big data, there’s no reason to make such opinionated guesses,” Bonaddio said. “Sports are a relatively predictable chain of events. I want to be on the cusp of using math, statistics and rational logic to make predictions.”

Even with his lofty goals in mind, Bonaddio is starting small. His first targets? Sports writers and fantasy football lovers.

“Now we can use data to make a profound change to how writers write about sports and how consumers predict their choices in fantasy leagues,” Bonaddio said. “If you go on ESPN and Yahoo, these people are giving recommendations based on gut feelings. The data exists, so why not use it? It seems obvious to me.”